Mobile telco VHA released its local iPhone 4 pricing this afternoon for its Vodafone and 3 brands, at the end of a day which has been packed full of announcements about how and at what price Apple’s latest handset will launch in Australia late on Thursday night.

This morning Telstra and Optus also released local pricing for the iPhone. Like VHA, the two other telcos will offer the iPhone on various plans underneath $100 per month, with the costliest being a Telstra option at $99 per month that comes with $1000 worth of included calling and SMS value and 500MB of data allowance.

In general the Optus options come with greatly increased data quota compared to Telstra’s plans, as well as increased included call and SMS value. However, independent tests have shown Telstra’s Next G network to be superior to that of Optus on a range of criteria, although Optus’ network was a viable alternative.

Vodafone’s $29 monthly iPhone 4 plan is – on paper – the cheapest iPhone 4 plan in Australia, but it will also require customers to pay $18 or $24 per month in handset costs for the 16GB or 32GB iPhone 4 respectively, pushing the actual monthly price up substantially.

VHA has not listed up-front costs for either its 3 or Vodafone brand for those who want to buy an iPhone 4 outright.

Vodafone’s $29 iPhone 4 plan comes with 50MB of data, plus a “bonus” 500MB, “unlimited” calls to Vodafone and 3 customers and $180 worth of calls and text messages to any other network. The top Vodafone plan is a $99 option which comes with “unlimited” monthly credit on calls and 2GB of mobile data plus a bonus 1GB. Customers who sign up for a $99 Vodafone plan will not need to pay an extra handset costs per month.

Unlike Optus and Telstra, which have both confirmed they will open some retail outlets for midnight iPhone 4 launches, VHA has not yet detailed its own launch timing plans but is planning to do so tomorrow (Thursday). 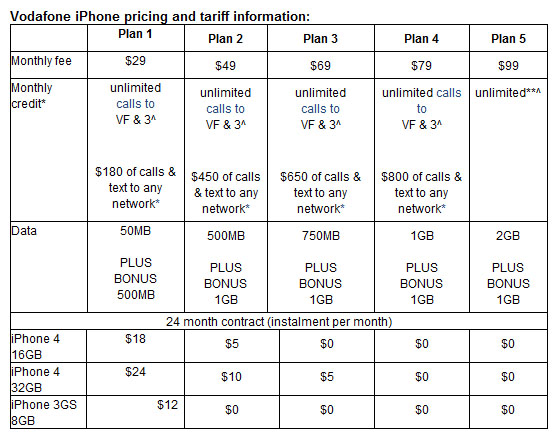 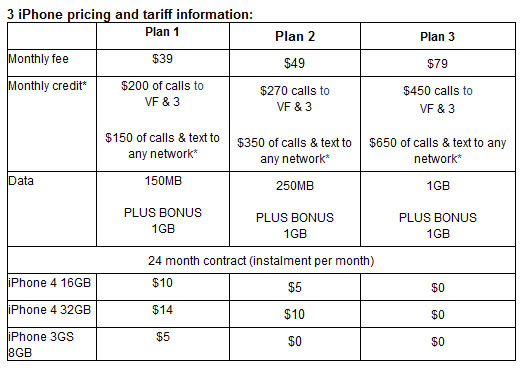