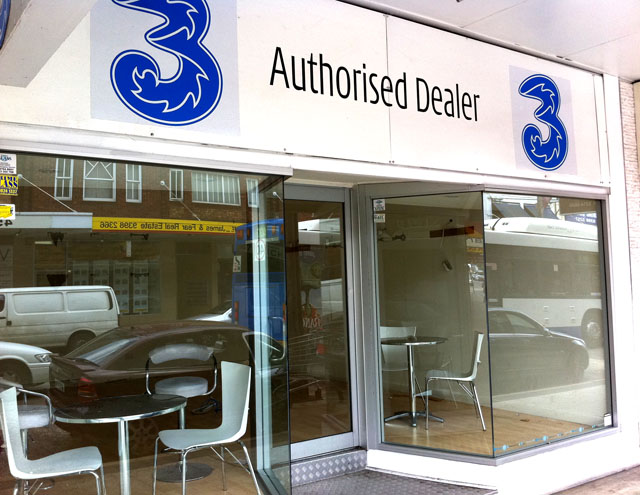 blog I couldn’t help but recall comments by Vodafone Hutchison Australia chief executive Nigel Dews last week as I walked past the shell of the ‘3’ store in the Sydney suburb of Randwick.

In a financial results briefing, Dews noted that, following the merger of Vodafone and Hutchison (which operated the ‘3’ brand in Australia) in 2009, the integration of the pair’s retail shops was well established. I don’t have his exact words in front of me, but a presentation associated with the results session states that all retail stores (including the ‘3’ ones) are now selling Vodafone products, and consolidation of the retail store footprint was “well progressed”, with a store refit program under way.

The Randwick stores are a case in point in that integration. Randwick had both ‘3’ and Vodafone stores — and despite the merger of the two companies over the past several years, both continued to see regular foot traffic, courtesy of the strength of the ‘3’ brand in metropolitan areas like Sydney, where Hutchison had focused its coverage.

Over the past few months, however, the ‘3’ store has been shut down, and the Vodafone store fit out with an awesome new interior — in fact, it looks much better than the Optus store across the road, which looks tired and haggard in comparison. I don’t think there is a Telstra store in Randwick, although Australia’s largest telco usually has pretty flash facilities. I’m a patron of Telstra’s Sydney CBD store, which has excellent specialised customer service.

Of course, ‘3’ customers have nothing to fear from the merger; they’ll gain broader scale and more network investment through it, and dramatically faster speeds are on the foreseeable horizon courtesy of VHA’s decision to replace its entire network with Huawei kit over the next 18 months. The only caveat is the closure of the ‘3’ 2100MHz network, which isn’t slated to take place until 2012 anyway — plenty of time to upgrade your handset, if in fact you even need to.

But it is an appropriate time to reflect on the passing of one of the great innovators in Australia’s telecommunications sector. If it wasn’t for Hutchison’s entrance into the Australian mobile market in the early years of last decade, Australia’s other mobile telcos might have taken much longer to develop 3G services.

It was Hutchison which gave birth to 3G mobile services and broadband in Australia. It’s OK that the brand is gradually being retired. But it’s also OK to remember what it gave us for the time that it was here.