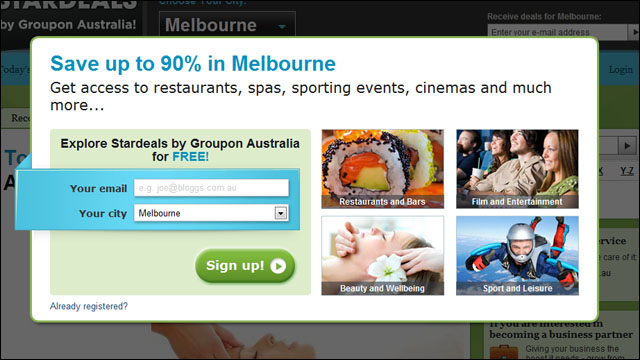 As part of the global Groupon network, Stardeals is a shopping website that offers daily deals, using the principle of collective buying which proved to be successful for Spreets.com.au, one of the competitors in the field, which was recently bought by giant Yahoo!7.

Subscribers receive free daily emails which alert them on the available deals. The discounted prices are unlocked only when a certain number of people agree to buy, thus pushing subscribers to share among their contacts the deals on offer. The system allows people to buy at better value and companies to maximize their visibility and revenue through social media.

Groupon president and chief operating officer Rob Solomon said its company – which operates under the name of Stardeals in Australia – was pleased to expand its portfolio of subscribers Down Under. “We’re thrilled to introduce our network of 60 million subscribers to the world-class merchants of Australia,” he said. “Stardeals will leverage the best practices Groupon has pioneered in more than 40 countries around the globe to change the face of local commerce.”

Groupon is a US-based company which launched in November 2008 in Chicago and currently employs about a thousand staff across Europe, North and Latin America. The company claims it has access to more than 500 markets around the world and will bring this expertise to boost Australia’s retail market.

It is using the Stardeals brand in Australia because the GroupOn domain name and trademark are owned by rival company Scoopon — which has declined to relinquish them, leading to current legal action over the matter.

Stardeals chief executive Alexandra Podenau said the website offered a different way of marketing to Australian retailers. “Stardeals brings buyers and sellers together in a fun and collaborative way,” she said. “We give consumers unbeatable deals while offering businesses an unprecedented and effective form of marketing.”

At the moment Stardeals is available in Sydney and Melbourne only, but the company promised it would extend its services to serve eight more territories in coming months. Among the deals on offer are currently surfing lessons, dance classes and upscale spa treatments.

However, Groupon has already received a less than cordial welcome in the Australian market — which is currently packed with at least a dozen or so competitors who have adopted its model locally. Writing on his personal blog, Billy Tucker, the chief executive of Ninemsn and Microsoft joint venture Cudo, accused GroupOn of running a “bait and switch” offer with its first offer yesterday.

“Clicking on the ad for $8 all you can eat macaroons takes you to a sign-up page — no such offer exists,” he wrote. Deceptive. Yes. Bait and switch. I think so. Unless I am missing something, this type of bait and switch advertising is way out of line and threatens to damage the market as a whole. One thing is for sure, Cudo will never resort to these desperate tactics.”