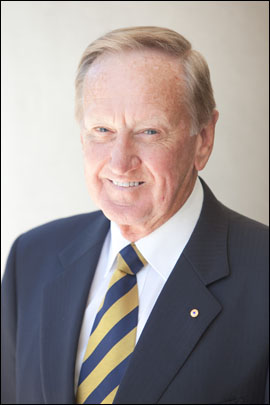 NBN Co released a statement this afternoon noting Campbell had advised he would be leaving the project “for personal reasons” and retiring at the end of the year. A spokesperson for the company subsequently confirmed it was looking for a replacement for Campbell, who also sits on the board of NBN Co itself.

Campbell — a qualified civil engineer — had initially retired in December 2005 after a 48-year history in the global telecommunications sector, notably as the founder and long-time group managing director of Telstra’s Country Wide rural division. He also spent some 30 years in Canada’s telecommunications industry.

After 2005, he resurfaced during the first NBN tender process held by the then-Rudd Labor Government as the chairman of Acacia, representing a group of businessmen who put in a failed bid to build the NBN.
In July 2009, Campbell was appointed by the Federal and Tasmanian Governments to be the chairman of NBN Tasmania, which was initially planned to be a joint venture between the Federal National Broadband Network Company and state-owned Tasmanian utility Aurora Energy.

However, the joint venture never eventuated, with NBN Co retaining full control of NBN Tasmania as a wholly owned subsidiary.

NBN Co chairman Harrison Young said the company’s board, management and staff acknowledged the contribution the executive had made to its progress, and wished him and his wife Joy all the best for the future.