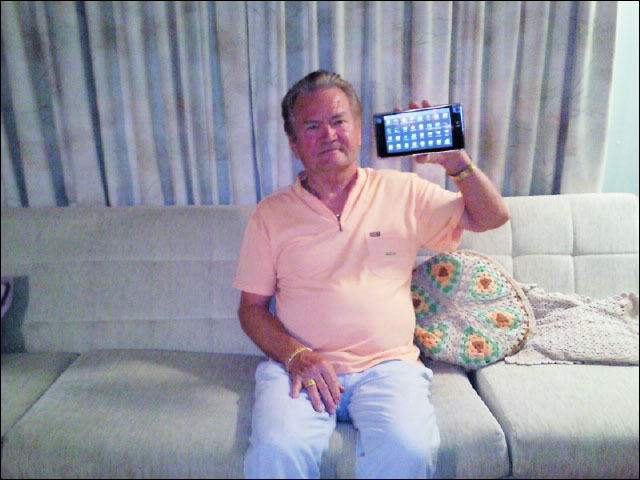 Telstra’s board and senior management today faced down a series of shareholders angry about the company’s dwindling share price, with one accusing the beleaguered telco of having suffered “ten years of failure” in terms of its management and another branding the situation “a shocker”.

“The main objective of the board is to make a profit for shareholders. Unfortunately at Telstra you’ve had ten years of failure,” shareholder Peter Pollis of Coogee, NSW told the board at the AGM during question time. “On page 33 of the annual report it says your duty is to protect shareholder value. You have failed.”

Long-time shareholder Sydney Lawrence (pictured above with his new Telstra T-Touch Tab) welcomed what he described as “the glowing self-introduction” of Telstra’s individual board members earlier in the day, as well as the speeches of Telstra chairman Catherine Livingstone and executives David Thodey and John Stanhope.

However, said Lawrence, all the speeches didn’t amount to a can of beans. The shareholder advised Telstra to look to its share price. “We don’t need to say any more,” he said. “With the Telstra share price going towards $2, will the board accept that they must do their job, which is to increase shareholder finances — or will they admit they have failed in their duty and resign?”

Steve Bookavalis from Yarraville told Telstra’s board its performance was “a shocker”.

He said both St George Bank and Qantas had been “up for sale” over the past few years and asked why Telstra didn’t consider buying the companies to increase profits. “Telstra as a company has a massive problem. I know what the problem is, and I know what the solution is — and I’m sure the directors don’t know what the solution is,” he said. “The problem is a lack of ambition. It’s time Telstra became a multinational company. Directors, grow up — have some ambition for the shareholders.”

“Telstra’s in big, big trouble as a company.”

Pollis said he had a “three point plan” which could add $10 billion to $15 billion to Telstra’s value, which he had articulated on the “blog” of economics commentator Ross Greenwood. “Unfortunately, youse have a view that every Telstra shareholder wants a dividend,” said Bookavalis, claiming that what shareholders wanted was in fact to avoid capital loss.

Other Telstra shareholders pinioned the company on customer service issues, despite the fact that Livingstone had specifically asked that those issues be addressed by customer service staff.

“I’m a reluctant customer of Telstra,” said one Robert Dowling from Eaglemont. “The majority of people here, I would bet, have got their own disaster stories. Why does it take a financial disaster in the company to make it realise that customers are what drives the business?”

Livingstone and Thodey responded to the shareholder complaints in a firm but polite manner.

“We are not diversifying into airlines or banks,” Livingstone told Bookavalis. However, the chairman noted Telstra was finding new sources of revenue — such as mobile broadband — to offset declines. “We are very ambitious for Telstra,” she said.

Thodey pledged to look into many of the customer service issues personally but warned it would take time to make systemic change. “This is not just a quick fix, you need to re-engineer many aspects of the business,” he said.