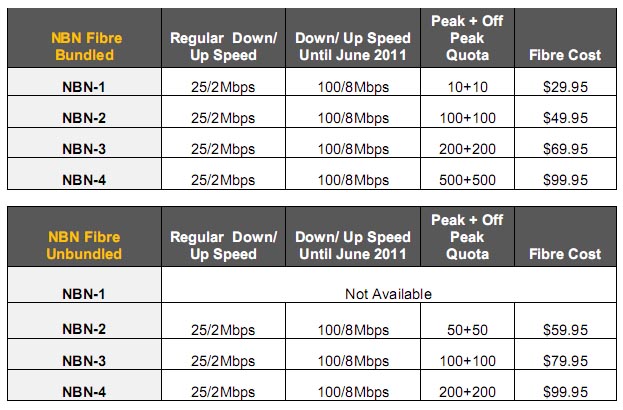 Just 70 customers might have signed up to the National Broadband Network in Tasmania so far in total, but iiNet today revealed it would provide them with full 100Mbps speeds on all plans and the option of a terabyte data quota to truly get the benefit out of the fledgling fibre service.

In a statement issued today, iiNet chief Michael Malone said iiNet wanted to give Australians a taste of what the NBN would deliver, for the same price they would usually pay for ADSL2+ broadband.

“The main advantage of the NBN is speed. You don’t know what it’s like until you actually use a reliable 100Mbps fibre connection in the home. And these speeds are seriously awesome,” he said.

“The NBN is essential infrastructure that will help us keep up with the rest of the world. We’re really pushing copper to its limits with new applications like IPTV, but it won’t be able to deliver the next generation of applications,” the CEO added.

The updated NBN plans will be available to new customers from 1 September. Normally NBN customers are given a choice of three speeds — 25Mbps, 50Mbps and 100Mbps — but the 100Mbps speeds will be offered free of charge to all until 30 June 2011.

The updated plans mean that customers will be able to sign up for a 100Mbps plan with 500GB each of on-peak and off-peak data (for a total of 1TB) for just $99.95 when bundled with a telephone line — or with 400GB of data when not bundled, for the same price.

Even low-end customers will benefit, with those on $29.95 plans still gaining access to the 100Mbps speeds, allthough they will only have 20GB of total quota.

The fate of the NBN also hangs in the balance this weekend, with the latest polls having Labor and the Coalition neck and neck in the Federal Election. If the Coalition wins the vote, the NBN project will be scrapped and its assets sold to the private sector.