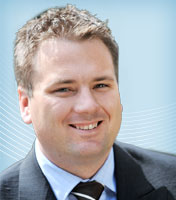 profile Federal Liberal MP Jamie Briggs doesn’t respond like your typical conservative politician when you ask him about his attitudes towards technology.

It’s common for politicians to talk about how the dangers of technology — online pornography, violence in video games, the need to carefully evaluate the impact of new innovations on society and so on, when you ask them what they think of technology issues.

But Briggs takes a different slant. When you ask what his favourite gadget is, like many in positions of power he mentions his BlackBerry. But he quickly follows his statement up by noting that this isn’t by choice — it’s simply the device that parliamentarians are given by default. And then he immediately starts talking about Apple.

The MP says he’s tempted to get an iPad to replace his daily newspaper reads — “the newspaper funcion is very good” — and he would probably even read books on the new Apple tablet. He notes his wife is about to get an iPhone.

You can see Briggs’ understanding of technology wound throughout his political career and the issues he has engaged on.

During his maiden speech in October 2008 (Briggs won the South Australian seat of Mayo formerly held by Alexander Downer in a by-election in mid-2008), the MP mentioned broadband as an important issue in his electorate.

“The internet is the great enabler of our time. It has indeed flattened the world. It is a tool for commerce that will drive economic growth. It is a tool for education that will help our children learn. It is an essential tool in our modern society,” he said.

“I believe that broadband must be reliable and it must be available at a reasonable price. To ensure that outer metropolitan and regional communities like those in Mayo get access to faster speeds into the future, there must be investment in a mixture of technologies.”

The MP has a Twitter account and more than 1,200 followers, and where some MPs target newspapers, he has a regular column on News Ltd blog The Punch.

One of his earliest jobs (before his election he rose to the position of adviser in the office of Prime Minister John Howard) saw him employed by South Australian state treasurer, Liberal MP Rob Lucas, who has been one of the few state politicians to take a strong interest in IT policy, being a constant thorn in the side of the state’s Labor government on IT spending.

But it was really Briggs’ intervention in the mandatory filter debate in mid-2009 which brought him to the attention of the technology community more broadly.

At the time, few Liberal politicians had spoken out in public with their views about the filter, and it would be months before senior party stalwarts like Joe Hockey would publicly express their disapproval of the policy.

Briggs’ article on the drum at the time was widely circulated as an example of debate within the party about how it should handle Labor’s controversial plan.

In an interview conducted before the election was announced, Briggs says that although the Coalition has not yet revealed its policy on the filter and has declined to do so until Communications Minister Stephen Conroy publishes the associated legislation, he hasn’t spoken to anyone within the party who thinks it’s a good idea.

Senior figures like Hockey already oppose the filter, and other MPs like Alex Hawke, Michael Johnson and Simon Birmingham have also flagged their opposition to the policy.

Briggs reiterated his view that the filter was a waste of time — “a piece of political fluffery dressed up as a genuine attempt to make the internet safe”. In general, he says the policy plays to parents’ fears about their kids using the internet. But in general, it was an attempt to add another of protection that wouldn’t add any value at all.

“I have young children that are about to enter the world wide web,” he says. “And of course I’m concerned. I’ll address that by ensuring that when they access the system, they’ll do it in front of us. They won’t do it in their bedroom with the door shut.

Briggs acknowledges that the internet can be a dangerous tool. But it was “mistaken policy” to assume that the Government could take absolutely parental responsibility for it. Parents will mistakenly believe the filter will solve all their problems, he says — “even if the Government system works, which I don’t think it will”.

In general, Briggs says the Liberal Party is probably not dissimilar to the Australian public when it comes to its understanding of technology. “Some know more than others,” he says.

He mentions leaders like Turnbull and Hockey as being fairly IT-savvy — Turnbull in particular has had close exposure to the IT industry through his part-ownership and chairmanship of ISP OzEmail thoughout the late 1990’s.

Briggs says the Westminister system of Government is designed to have politicians who can take expert advice in their fields — although of course certain politicians will fall into certain specialities or into lines of interest.

But he notes governments and legislation will by nature fall behind reality because of the speed of change — with one example being telecommunications policy — “the market is so far ahead of what government policy can keep up with,” says Briggs, citing the development of the Apple iPad as one example.

“Six months months ago we would have had a conceptual idea [about it],” he says of the iPad. ” … Now pretty much everyone in the country [knows about it].”

Governments are also constrained to focusing on the policy issues of the day, he says — because they are time-limited.

Another policy the Opposition has not yet spoken on is its attitude towards a proposal by the Attorney-General’s Department that would require Australia’s ISPs to store data such as records of telephone calls and emails.

Briggs says he’s “vaguely aware” that the idea has been around for a few years, but that the policy sounds like “a red tape nightmare” to implement and doesn’t know what his party’s official response is. But he notes the party has been strong on issues such as freedom of speech.

The MP also keeps up with the NBN debate. He backs the Liberal view that it’s not necessarily the Government’s role to get involved commercially — as Labor is with its National Broadband Network policy, which the Opposition would cancel if elected — in such areas.

In Mayo, he says, there are still substantial problems with broadband, which are slowly starting to be addressed through offerings such as Telstra’s Next G mobile network. But there’s still a ways to go.

In general, Briggs says he’s “obviously” interested in new technology, as he sees it as a field that offers Australia great potential. “I’m not sure we’re doing enough at the moment to enter into that space,” he says. “There are a range of things we can do in future.”

When former Liberal leader Malcolm Turnbull brought an iPad into the parliament earlier this year he caused a stir — the new device had not yet been seen in the chamber. It was not unlike a similar situation Communications Minister Stephen Conroy narrated last week at an event in Melbourne — Conroy had faced pressure in the Senate after bringing in a laptop to a room which had — up to that point — only seen briefing notes on paper.

But with young gun MPs like Briggs increasingly entering the Liberal party and Federal Parliament in general and bringing technology with them, this may increasingly change. And many in Australia’s technology industry will be watching to see what the younger generation will be able to change about technology policy in general.