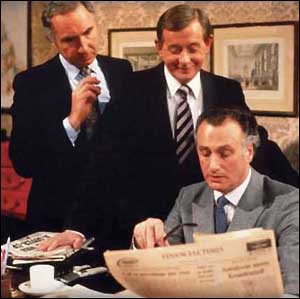 opinion To understand the situation that we find ourselves in regarding the internet filter, we need to refer to the great political textbook of our age: Yes Minister/Yes Prime Minister.

That great icon of the public service, Sir Humphrey Appleby GCB, KBE, MVO, MA (Oxon), once described what he called ‘the Politicians’ Syllogism’.

Logically, this akin to other equally famous syllogisms, such as:

“The Politicians’ Syllogism has been responsible for many of the disasters that befell the United Kingdom in the twentieth century, including the Munich Agreement and the Suez Adventure,” said Appleby (Yes Prime Minister II, pp. 130-1).

In the realm of internet filtering, we can see the Politician’s Syllogism quite plainly: Internet is full of naughty. A filter can stop naughty. Therefore we must filter the internet.

Now the issue here is that people who know the internet know that a filter is unworkable. However, this is based on the assumption that knowledgeable internet people are the target audience. This is of course incorrect. The audience is made up of a group of people who

So the filter is a brilliant policy in that regard. It is low cost to the government, it shows people that the government is doing something, and allows a loud segment of the community (the “somebody think of the kiddies” lobby) to cheer loudly for the government. So how do we the internet community change policy?

At the moment, the filter is controversial, and the Government probably believes that the votes lost with the internet savvy voters is offset by the gain in the votes from the “think of the kiddies” lobby. The internet net community needs to show otherwise. This may be very hard, with the media full of “dangers on the internet” stories, and a large segment of the electorate ignorant of how the internet works.

So, how do we make the filter look courageous? By playing the political game.

1. Write a letter to your local member. One letter does not scare a sitting member, however 100 or 1000 letters will. Especially for members in a swinging electorate, where 100 votes may mean the difference of 3 more years in parliament or getting a real job.

2. If you’re a member of a political party, raise the issue at your local branch. A sitting member is only as secure as the support of his/her local branch. If you can get a sizable percentage of the local branch to support the issue, the member will be hard-pressed to ignore the view.

3. Money. Money is the lubrication that keeps the political parties moving. It also allows your views to get public airing in the mainstream media. An example of a successful media process was the ACTU Workchoices campaign. However, I need to point out that having a political party sympathetic to the union view helped enormously. With ISPs and net users being the ones paying for the filter, they need to put up money to get its voice heard over the “think of the kiddies” lobby and the government.

4. Profile. The internet community needs to show it has sizable support. Twitter rage is all well and good, except that politicians do not, as a rule, see Twitter as a useful tool. The community needs to use the forums that politicians use, like local and regional newspapers and radio. Public rallies may work; however, they have to be set up to get the best profile in the news media.

5. Support the people who “get it”. Look at the problems Barack Obama had getting healthcare reform through Congress, despite having the majority in both houses. This does not happen here, as there is a large element of keeping to the party line in regard to policy. However, there will be tech-savvy people in all political parties and caucuses who realise that the filter is unworkable.

Don’t insult them or denigrate them, work with them by giving them data and assistance. These tech-savvy members are a great resource, and have better access to ministers than we the public can ever hope to gain. Give them the ammo to kill the filter!

6. Organise! The internet community has one advantage that many interest and lobby groups did not have previously: A rich and flexible tool to communicate, called the internet. While groups like the EFA and GetUp can take a leadership role, the netizens can organise themselves to act coherently and with a strong focus towards the goal of changing bad policy.

7. Focus on the balance of power. The government needs crossbench support to pass legislation. Nick Xenophon and the Greens are the most likely people to be swayed to block the filter (unfortunately, Stephen Fielding is one of the loudest supporters of the filter). Give them support, either money of assistance, or even a supporting letter. Show the crossbench they can gain votes in blocking the filter!

Can we change the filter policy? I honestly don’t know. However, history has shown that as the censor for Australia, the Federal Government is not well equipped to getting censorship right. So we may fail, but failing is better than not trying at all.