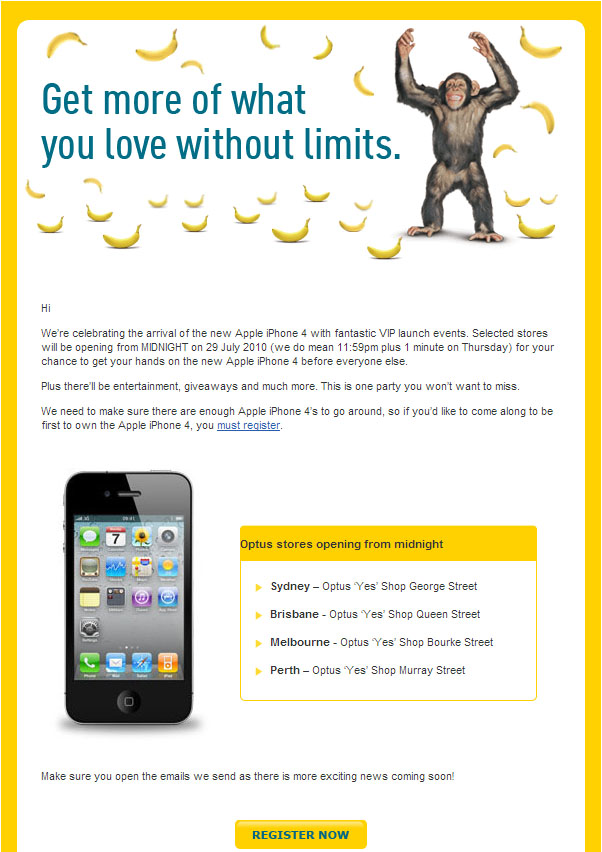 Optus this morning confirmed plans to launch Apple’s latest iPhone 4 handset at midnight launches around the country on Thursday night, despite Apple itself publicising plans to open its stores from 8AM Friday morning.

An Optus spokesperson said the telco had emailed its customers (see invitation above) that it would be holding midnight launch events for the iPhone 4 in Sydney, Melbourne, Brisbane and — for the first time — Perth.

“We’re celebrating the arrival of the new Apple iPhone 4 with fantastic VIP launch events,” Optus said in its email to customers. “Selected stores will be opening from MIDNIGHT on 29 July 2010 (we do mean 11:59PM plus 1 minute on Thursday) for your chance to get your hands on the new Apple iPhone 4 before everyone else.”

“Plus there’ll be entertainment, giveaways and much more. This is one party you won’t want to miss.”

The confirmation comes a week after The Next Web reported Optus would hold a midnight launch, but until this morning none of Australia’s telcos had confirmed they would do so. Neither Apple itself nor any Australian telco has yet confirmed pricing details for the iPhone 4 launch in Australia.

Apple’s site currently states that customers buying an iPhone on Friday from its own stores will be limited to two devices per person – with the handsets to be available on a “first come, first-served” basis. Typically iPhones will be sold from both official Apple stores as well as the telco’s own retail outlets.