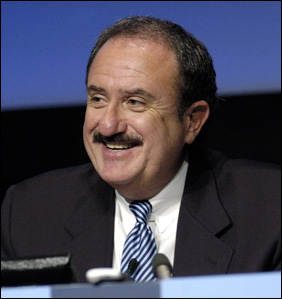 According to her publicly available LinkedIn profile, Cassandra Scott was a speechwriter for Trujillo for a large part of his tenure with Telstra — preparing orations for the executive from March 2006 right through to August 2008.

At that point Scott was appointed to be the general manager of Telstra’s Experience Centre — a high-profile space inside the company’s George St, Sydney building where it demonstrates the latest technology to external parties — executives from other companies, public servants from governments and so on. It also uses the facility to hold press conferences with journalists.

Scott left Telstra in June, according to that profile — taking a position in stakeholder relations for NBN Co.

Trujillo was known for his bombastic, aggressive approach to the Federal Government during his speeches, often using them to attack what he saw as an over-the-top approach to regulating the telecommunications sector. But he could also exhibit a warm and friendly manner and cracked jokes at several business lunches and breakfasts during his tenure.

The news comes as Telstra continues to be one of the main sources of staff that the fast-growing NBN Co is drawing from as it fills out its company structure, although the company has also recently made hires from a number of technology vendors operating in Australia, as well as other telcos like Optus and AAPT, for example.

Analysis conducted by Delimiter this week shows the first wave of promotions inside the company have already begun to take place, as opportunities open up with additional headcount.