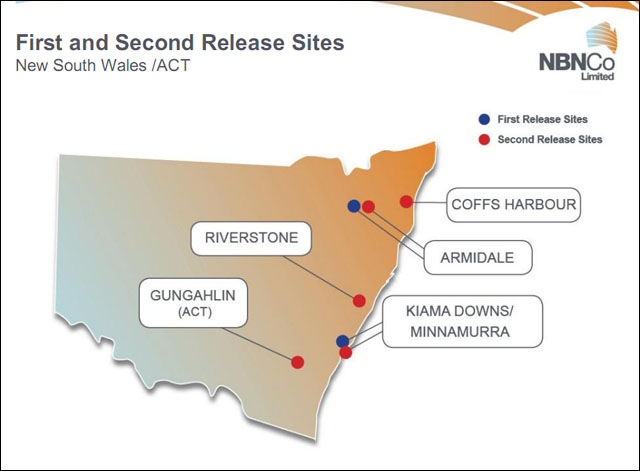 “These sites have been selected based on a range of criteria including engineering and construction requirements, network design and the level of existing broadband infrastructure.” said Quigley. “The engagement of local government and the receptiveness of communities to broadband initiatives were also factors taken into consideration.”

The 19 new sites will be spread out across all Australian states. 14 of the number will be new sites and five existing NBN locations will have one or two adjacent rollout sites.

“We have selected these sites to build upon the work we are doing in the first release sites,” said Quigley. Victoria will have three locations, one being in Bacchus Marsh, the other in the Melbourne suburb of South Morang and an adjacent rollout site in Melbourne suburb Brunswick.

South Australia will receive the rollout in Modbury, Prospect and two adjacent sites, with one in Victoria and the adjacent site to Willunga is Seaford/McLaren Vale. Western Australia will have roll out sites in Perth suburb Victoria Park, Geraldton and Mandurah. The Northern Territory site will be in Casuarina and Gungahlin in the ACT is another site.

Conroy said: “There is no doubt communities across Australia are crying out for faster, more affordable broadband and we are delivering this as quickly as possible.”

Each rollout location will host an approximation of 3000 homes and business, but that figure will fluctuate after talks with local authorities in each particular area. Construction will begin on the sites in the second quarter of 2011. NBN Tasmania is expected to formally launch the first stage rollout within a couple of weeks, although some customers have already been connected.

“The Government has already prioritised the rollout in Tasmania and I will be visiting that state in the coming fortnight to celebrate the first customers receiving NBN services in Australia,” Senator Conroy said regarding the NBN Tasmania launch.