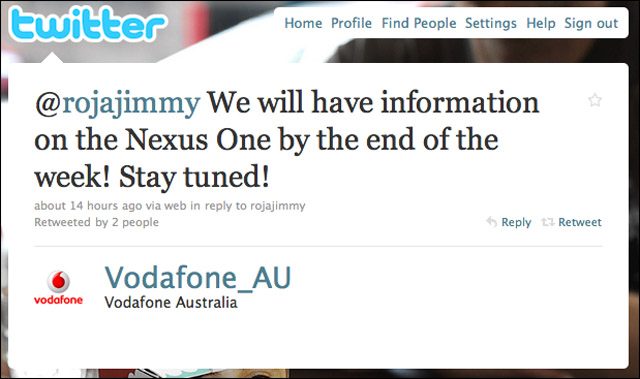 Vodafone Australia’s official Twitter account has promised customers more information on an Australian launch of the Nexus One by the end of the week, adding fuel to the fire of speculation that the mobile telco will launch Google’s Android-based smartphone in Australia.

The Nexus One is an Android phone marketed by Google internationally and manufactured by HTC. Its specifications are similar to those of the HTC Desire, which Telstra recently launched in Australia to great interest from consumers, but Google’s own offering has yet been retailed by Australian telcos.

The Vodafone tweet is the second time in as many weeks that Vodafone has appeared to confirm a local Nexus One launch, with blog Android Australia having previously reported that a poster on broadband forum Whirlpool had been told by a Vodafone representative online that the phone would be coming in mid to late June, posting a screenshot of their online chat.

Spokespeople from Vodafone Hutchison Australia have not given out any official info on the matter so far though, and Google has said that while it would love to see the Nexus One come to more countries, it had nothing to announce about any possible launch in Australia.

The news comes as Australia’s mobile telcos continue to focus heavily on the Android platform, with Optus winning a month’s head start on rivals with an exclusive deal on Samsung’s Galaxy S phone. Details were announced this afternoon.