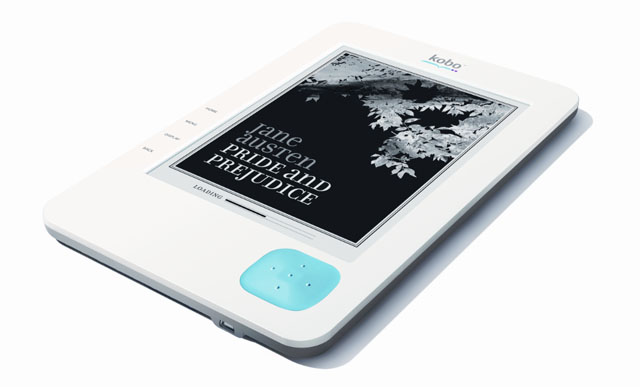 The Kobo eReader from Borders Australia has proven to me to be a great device. I won’t go over the specs again; instead I will talk about the utility of both the hardware and software part of this device.

The hardware
As a device, the Kobo is a great reader. I did have some concerns about the blue button for page-turning. In use I did not feel that the placement or ergonomics was a burden, but I did notice some cases of click-through due to the design of the button.

The screen is very crisp, and in most cases very easy to read. The only time I had issues with reading with the device was in a moving bus at night. A good light source is required for reading, but the light can come from almost any angle, so it is great at night with a bed light next to you.

The books I installed via the USB cable took almost no time, and with a SD card installed, I was able to put my PDF books on the card and all the other books on the device proper. Adding PDF files to the device memory quickly took up a lot of space, but with careful management, you can live without the SD card. The eReader does not care where the book is memory wise, and the menu consolidates into two sections — documents (PDF) and books (ePub). Both the Kobo and SD card show as removable drives in Windows, making it very versatile and portable.

Battery usage was trivial. It has a small charge taken out of the box, but it is worth the effort to let it fully charge before use. Docking to download books via USB tops up the charge nicely. When turning on, the Kobo does take a small time to power up. If you uploaded books or PDFs, the power up can take a lot of time, as part of the power-up cycle is to check for new media.

The only hardware issue is the in-built Bluetooth. The only Bluetooth connectivity at the moment is with BlackBerry phones, so the promised syncing between platforms is not available for PC and/or iPhone users. I expect this to be fixed in a later firmware upgrade.

The software
The bundled “Borders, powered by Kobo” software and attached eBook store is the big weakness of the package. Books bought in the store did not transfer nicely to the eReader. Covers were missing on all the books I tried, and one book did not download fully at all. In this regard, the iPhone app is a better experience.

The range of books is also quite shocking. A lot of the new bestsellers are available, however, for genre books, the collection is very poor. For sci-fi/fantasy, for example, a lot of authors were missing, some of the classics of the genre were absent, and the search and refining tools were appallingly bad.

As a tool to manage an eBook library, the Borders software does not even bother. It only manages and syncs with books bought via its own bookstore. So people who download books from Project Gutenberg or other legal sites will have issues managing their collections on a PC.

However, the Kobo eReader is fully supported by Calibre. This free and open source software allows management and cataloguing of an eBook collection. An added bonus is that non-DRM ebooks not supported by the Kobo can be converted easily by this tool. I have tested it and found the conversions are well done, without some of the artifacts found when you convert between formats. Calibre also has the advantage of being ported to almost all available operating systems, including Linux and OS X.

Unless the range improves, or there is a major redesign of the software, I recommend ignoring the bundled software and using Calibre instead.

Conclusion
At $199 the Kobo is a great reader let down by some crappy software. However, the utility of the device is improved vastly if used with Calibre. For the price, it is almost the perfect reader, with only limited Bluetooth capability hampering the device.