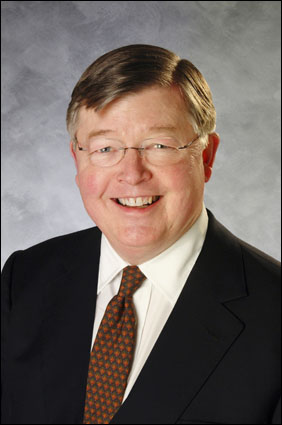 A new chairman with a history leading finance giant Morgan Stanley has been appointed to the National Broadband Network Company, with incumbent Mike Quigley to relinquish the role but keep his permanent chief executive officer spot.

Communications Minister Stephen Conroy announced the appointment of Harrison Young (pictured) to chair the NBN Co this afternoon, saying the appointment came after a selection process involving executive search firm Egon Zehnder, executive leadership consultancy EWK and consultation by the secretary of Conroy’s own Department of Broadband, Communications and the Digital Economy.

Young has an extensive background as a company director and executive, but no experience in the telecommunications sector.

He is currently a director of the Commonwealth Bank of Australia and serves on the Court of Directors to the Bank of England. He is also the chairman of Better Place Australia, the local subsidiary of the global electric vehicle services provder.

Before his Morgan Stanley role, Young was chief executive of China International Capital Corporation in Beijing for two years.

He is deputy chairman of the University of Melbourne’s Asialink centre, and of the Asia Society AustralAsia Centre, as well as sitting on the board of Florey Neurosciences Institutes and being chairman of the institute’s foundation. In addition, he is a director of the New York-based Financial Services Volunteer Corps.

Conroy’s statement noted Young had previously made donations to both sides of poltics. “One such donation of $5,000 was made to the Minister for Finance and Deregulation prior to the 2007 election, and therefore the Minister has taken no part in the decision to appoint Mr Young,” the statement said.

Quigley — who had managed the NBN Co as both chairman and CEO since he took both roles last year, will retain his CEO role and board spot. His chairman appointment had been temporary to get the NBN Co off the ground.