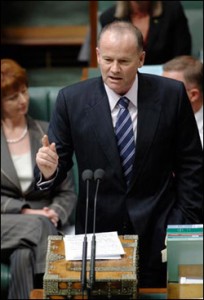 Finance Minister Lindsay Tanner today promised the Federal Government would not concentrate all of its resources in “one giant datacentre”, as he outlined a 15-year plan for Canberra’s $850 million annual datacentre needs going forward.

“Aside from the practical issues associated with doing that, the impact on industry would be unwelcome,” the minister told a conference in Sydney this morning.

Instead, as part of its new whole of government datacentre strategy launched today, the Federal Government will in the first five years of the strategy aggregate datacentre demand across the public sector and establish a panel of suppliers to meet that demand.

“It will become mandatory for agencies to utilise this panel as their existing datacentre services require replacement,” said Tanner.

The Government is planning to go to market in “third and fourth quarters of this year” for the panel. It intends to utilise datacentre sites both inside and outside the Australian Capital Territory, but the minimum amount of floor space it will be procuring will be 500 square metres, with a 10-year lease and optional extensions of up to five years.

It will also assist agencies to move to situations where they are sharing resources, facilities and even ICT solutions and define standards to be used across Government to achieve maximum efficiencies.

In the second five years of the plan, the Government will aim to drive further agency sharing of resources, while in the last five years, Tanner said agencies would adopt new opportunities to reduce costs that arose from changes in “technology, processes or policy”.

The full strategy will be available today — with copies being handed out at the CeBIT conference this morning which Tanner spoke at. Its generation stemmed from the report into Government ICT use delivered by British efficiency expert Sir Peter Gershon in 2008.

“However, unlike the more efficient data centre consumers, the Government’s data centre equipment is not centralised. It is spread across Australia; located in not just large enterprise datacentres but also cupboards, converted offices, computer and server rooms, and in commercial and in-sourced datacentres,” he said.