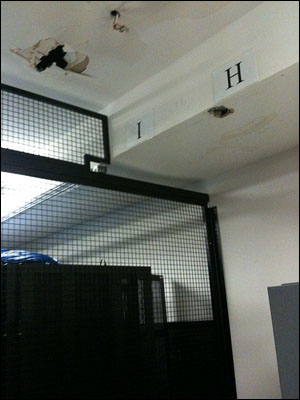 Dissension has emerged in Australia’s ICT industry about whether a Melbourne datacentre belonging to New Zealand-headquartered player Datacom was flooded due to hailstorm weather conditions in the Victorian capital over the weekend.

The issue has been the subject of a discussion on the AusNOG network operators mailing list and iTnews has reported it has seen photos of water pouring into the facility, which appears to be used by a number of telco customers, but Datacom has told the outlet the centre was not down and it was not flooded.

A number of network operators on the AusNOG list were openly speculating that it was the Globalcenter datacenter on City Road that was affected. Datacom bought the facility in 2004. And a user named “jason_one” posted the photo on the right on Flickr, saying it was the hole through which water entered the facility.

However, Delimiter has not been able to verify the accuracy of the photo.

Telco customer Optus said in a statement that it could confirm the hailstorm on Saturday caused damage to a roof at the facility with “subsequent water affecting one of the power sources, causing a hardware failure”. The telco said services were restored at 2AM on Sunday.

Delimiter has not been able to get in contact with a spokesperson from Datacom to verify what occurred at the facility.