opinion If I hear the word “cloud computing” mentioned one more time in the next month I am going to petition Kevin Rudd to create an ombudsman to deal with the matter.

(Hell, it worked for those poor souls concerned that rogue postings on Facebook are going to destroy the fabric of Australian society) 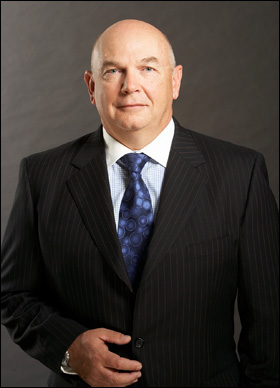 Just like green IT some 18 months ago, Australian IT services companies and vendors are currently obsessed with cloud computing. And just like green IT, they are explaining it poorly with phrases of marketing guff that often mean nothing.

A prime example of this problem was the speech delivered by local Fujitsu chief Rod Vawdrey (pictured) at the MediaConnect conference on the Gold Coast on Sunday (disclosure: MediaConnect paid for accommodation and flights for journalists).

The executive announced a new product that Fujitsu calls “Infrastructure as a Service”, but didn’t initially provide any real details on it actually was. Take a look for yourself — you can read Fujitsu’s press release here.

After a brief speech, Vawdrey was hammered by journalists (including yours truly) who wanted to know exactly what Fujitsu was announcing. What applications would run in the cloud? How was the strategy different from what Fujitsu was already doing? What partners and software was involved?

It can’t have been an enjoyable experience for the executive, and the talk at the conference afterwards was disbelief at the lack of clarity.

And yet the detail was there, as Vawdrey and Fujitsu chief technology officer Marc Silvester gradually explained. It’s just that like so many other vendors at the moment, Fujitsu didn’t initially lay that out as clearly as it could have.

If you really drill down into what the company is doing, its cloud strategy is not that different from that of its rivals. What it really boils down to is more flexibility around how corporate applications — both standard packages and custom-built software — are hosted, where they are hosted and the platforms they are hosted on, and innovative pricing models.

It’s no big surprise that CIOs are demanding these sorts of services — they’re looking to cut some of the fat out of their infrastructure and run things a bit “lighter”. The old days of big, bad, monolithic in-house applications are gone, and should be.

There’s nothing wrong these days with handing off services like email and CRM to cloud providers and even accepting a little less than five nines availability along the way.

IT services companies like Fujitsu aren’t throwing the baby out with the bathwater. They’ll still continue to offer the same traditional IT services they always have. But they’re responding to obvious customer demand around new models.

One example of this would be the intense CIO interest in handing off corporate email systems into cloud platforms such as Google’s Gmail. Many managers are simply tired of the effort and expense required to manage a complex in-house solution like Microsoft Exchange for users who often don’t need 90 percent of the features.

Microsoft also knows this — it’s why it’s also increasingly talking about its own cloud email services. Just a few weeks ago CSC revealed it would provide a suite of Microsoft applications from Australian datacentres based on a cloud model.

What the industry really needs to admit at the moment is that cloud computing is not really anything that new. It’s just some smarter thinking about how IT services companies can work with technology vendors to produce better, more flexible outcomes for their customers.

So just say so.