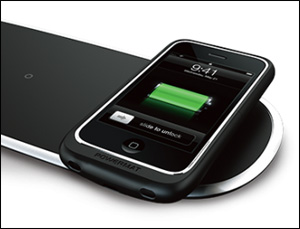 The company behind the innovative range of Powermat cordless inductive charging devices has flagged plans to launch the products in Australia.

Powermat chargers (pictured) allow users to charge battery-powered devices such as iPhones and other mobile phones, Nintendo DS units, Sony PlayStation Portables, netbooks and laptops and more, by simply attaching a ‘receiver’ device to the device and then putting it on top of the charging mat.

The devices launched last year in the US and are now coming to Australia, according to an invitation – “Powermat is launching in Australia” — sent to journalists last week. The launch event will be on 25 March.

No pricing details were immediately available, but Powermat’s statement noted journalists at the launch would have the chance to win a Powermat valued at $199. In the US the devices launched for the price of $99.99, plus another $40 for each receiving attachment that connects to your mobile devices.

The devices have generally received positive reviews. For example, CNET.com wrote that the technology is innovative and works “just fine”. However, the price appeared to worry reviewers, who noted they were broadly happy with the normal charging cords all gadgets ship with.

“It’s not the cheapest charging method we can think of, but it’s sure to be a conversation piece at your next rager,” wrote Engadget.