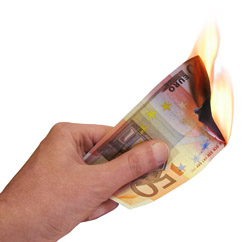 ASX-listed internet telephony company Freshtel continued to burn through its cash reserves over the three months ended 31 December 2009, ending the quarter down $988,657 compared to when it began.

The company had $1.37 million in cash reserves at the beginning of the quarter but ended it with just $401,164, according to a financial statement issued on Friday last week. Much of the money ($506,236) went on staff costs.

It’s an issue the company has flagged before– in mid-November Freshtel chairman Allan Sullivan warned investors the company had had “an extremely difficult year” and the company had considered the potential for it to delist from the Australian Stock Exchange as “cash burn is, and will remain in the short term, an absolutely critical issue for the company”.

At that stage Freshtel was looking at merger opportunities, an ongoing cost-cutting program and the continued development of its technology to resolve its difficulties.

The company has also sacrificed its chief executive salary — then-CEO Rhonda O’Donnell left Freshtel in August last year, “in part, to facilitate the necessary cost reductions”. In the interim, Sullivan is standing in as executive chairman. Her base salary was $400,000 per year.