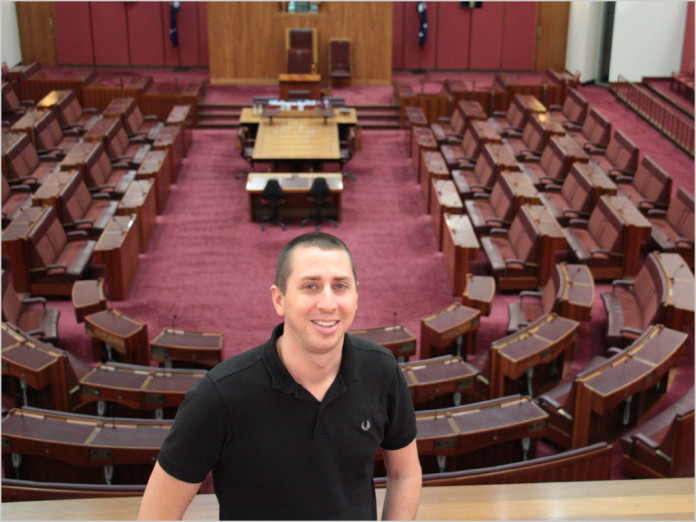 I just wanted to drop readers a brief note to let you know that yesterday I was approved to join the Federal Parliamentary Press Gallery in Canberra.

This may seem like a small step. After all, I’m already based in Canberra, proceedings of the Federal Parliament are broadcast online, and the Parliament’s many committees are open to the public. Delimiter has been covering technology policy, government technology projects and the politics of technology for some time. So, what has really changed?

In short, quite a lot.

Being a member of the Press Gallery means that I will have a pass to go into the private areas of Parliament House.

It means I will be able to attend many more press conferences with Australia’s Federal MPs and Senators than I would have previously been able to. It is common, when the Federal Parliament is sitting, and on other key days, for politicians to hold press conferences inside Parliament House, either in briefing rooms or in the many courtyards which are found in the building.

And, of course, it means that I will be able to sit in the physical Press Gallery in the Senate and in the House of Representatives and directly observe the proceedings of Parliament live as critical legislation is debated and other Parliamentary actions take place.

Up until this week, I’ve been limited in how closely I can cover technology policy and politics in Canberra. When researching stories for Delimiter and material for my book, The Frustrated State, I have had to deal with the Parliament from an outsiders’ perspective. Now, I will be much more on the inside.

There will also be more subtle effects stemming from my membership of the Press Gallery.

As you know, technology-related issues are increasingly becoming important to the Federal Parliament, as well as the various political parties which make it up.

We’ve all watched over the past few years as issues such as the National Broadband Network, data retention, Internet filtering and censorship, IT and video game industry support, fair taxation of technology multinationals, crypto-curriencies and even electronic health records have been heavily debated and featured in legislation and inquiries in the Federal Parliament.

The existing journalists who are already members of the Federal Parliamentary Press Gallery (you can see the list here) represent some of the best journalists in Australia. They are exemplary at covering all issues relating to politics and I have the utmost respect for them.

But it’s also true that the lack of many dedicated technology reporters in Canberra has meant that niche specialist topics such as I’ve mentioned above sometimes might not get the emphasis that IT professionals and technology enthusiasts think they deserve. There are just so many issues at play simultaneously, and getting a deep understanding of every topic is very difficult.

My hope is that my membership of the Press Gallery, with my niche focus on technology policy and politics, will provide an added dimension to the coverage generated in Canberra, sometimes covering issues which might not get detailed coverage otherwise.

I also hope that it will help to accelerate the understanding which MPs, Senators and their staff have regarding technology issues in the Parliament and the community — sometimes, just being asked questions about a given issue by a journalist is enough to spark interest in political circles.

And, of course, ultimately I hope to uphold the traditions of the Press Gallery itself — informing the public and providing a check and balance on power in one of the centres of power in Australia, reporting accurately and analysing wisely without fear or favour.

Details
One question I have been asked a lot about the Gallery is how it works, and whether I will have a physical office in Parliament House.

The answer to the first question is that the operations of journalists in Parliament House are broadly overseen by the Press Gallery Committee. It is these Committee Members who have approved my application. The rules for media activity in Parliament House, as agreed with the Parliament, can be found here, and the process of being accredited is also online here.

Most of the Press Gallery is physically based in Parliament House, where there are specific offices set up for journalists (large offices for large publishing houses such as Fairfax, the ABC and News Corp, and smaller ones for smaller publishers).

Initially I will not have an office in Parliament House, as I am still very much involved in getting Delimiter off the ground after its year on ice and conducting research for The Frustrated State — I will head up to Capital Hill in Canberra when there is Parliamentary action pertinent to my writing. There is a lot to do until I am ready to seek physical space in Parliament House. However, eventually down the track I hope to do so — and that will also be up to the Press Gallery Committee.

At this point I would like to say thank you to everyone who has supported me to get to this point. Firstly, to my family — there have been many long working nights recently, and they have put up with a lot. Secondly, I really appreciate the effort that a number of existing Press Gallery members made to support my application, and the time that the Press Gallery Committee has taken to examine it.

Of course, if it wasn’t for those who supported my forthcoming book, The Frustrated State (I hope to complete several chapters very shortly — I am frantically working on it!), none of this would be possible. I’d also like to thank Delimiter’s valued advertising clients, as well as technical and commercial partners who help make the publication of the site possible.

And lastly, of course, I’d like to thank Delimiter’s readership as a whole. I am very humbled by the community we’ve built here, and I will be working very hard to build it a lot larger over the next decade. I will do my best to live up to your expectations.

Thank you, and now on with the articles!