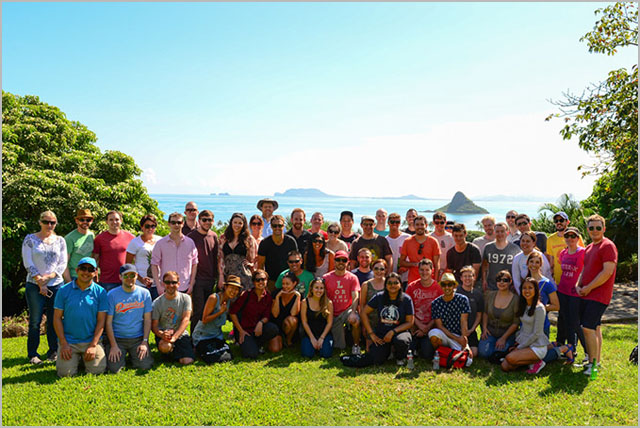 news Australia-based software as a service email marketing platform Campaign Monitor announced overnight that it had taken a $250 million investment from US-based venture capital firm Insight Venture Partners, in one of the largest ever VC investments in an Australian technology startup.

Campaign Monitor is a leading email marketing platform similar to Mailchimp that makes it easy for anyone to send newsletters and generate reports on the result. The company, which has only 65 employees (pictured above at their annual retreat in Hawaii), was founded in 2004 by Australian web designers Ben Richardson and David Greiner and has been profitable every quarter since launch, it said today. More than 100,000 paying customers in 170 countries rely on Campaign Monitor to manage their email marketing.

In a post on the company’s blog, Greiner said “times like these” forced him to look back to where it all started.

“It honestly feels like yesterday that Ben and I were running our own small design agency out of a spare room, building web sites and managing email campaigns for our clients,” he said. “As an agency with fairly unique needs, it wasn’t long before we grew frustrated with the tools available to manage these campaigns, and eventually decided the only way to solve it was to build our own. It’s funny how small decisions like that can have such a big impact on your life.”

The entrepreneur said while the company’s “numbers” were great, the truth was that Campaign Monitor had only come as far as it hard because of its customers.

“We’re also incredibly proud of our bootstrapping heritage. Being focused on running a profitable business from day one has given us the freedom to do things our own way, even if that’s in a completely different direction to most of our competitors. We’ve grown into the business we are today by focusing on what matters: building software that people love to use and making sure our customers have an amazing experience doing business with us.”

“You guys – the people who read our blog, enjoy our content and use our product – have done the rest by spreading the word.But the truth is, there’s so much more to be done. We want to make sure we continue to grow our team the right way and stay laser focused on building something that people will still love using a decade from today.”

“Campaign Monitor is just getting started. That’s why we’ve partnered up with Insight – a team we’ve built a relationship with over the last 5 years that have an amazing track record of helping companies we admire. These guys understand our dedication to building a great product and totally get the culture we’ve all worked so hard to create. As we grow from 65 to 165 people and beyond, we’ve now got the backing and wisdom of a partner that’s literally helped hundreds of software businesses before us. Stay tuned for some very exciting product updates in the coming weeks too. The team has been working their buns off on some great stuff that we can’t wait to get into your hands. Thanks for the last amazing decade, and here’s to the next one.”

Insight Venture Partners is one of the largest and best-known venture capital firms in the US. The group was founded in 1995 and has raised more than US$7.6 billion since that time. The company’s mission is to find, fund and work successfully with “visionary” executives who are driving change in their industries.

Deven Parekh, managing director at Insight Venture Partners said in a separate statement: “Campaign Monitor leads the market in SaaS email marketing and design solutions. We have been impressed by their remarkable global growth, widespread adoption and high customer satisfaction. Insight’s investment will help the company capitalize on the global demand for their solutions and build a global team to serve customers in all markets.”

Richardson and Greiner will continue to lead the company, but Insight Venture Partners managing directors Deven Parekh and Nikitas Koutoupes, along with associate Dan May, will join the company’s Board of Directors.

The Financial Review has additionally reported a number of further details about the deal, including the fact that Campaign Monitor is also raising a further US$160 million in debt, and that the VC investment valued the company at $600 million. The newspaper also reported that Campaign Monitor had talked to a number of other venture capital firms about possible investment, including Australian firm Square Peg Capital.

The investment is one of the largest known funding rounds for a venture capital firm in Australia, dwarfing the $60 million which US VC firm Accel ploughed into local software firm Atlassian in mid-2010. However, it appears that Insight has bought a substantially larger slice of Campaign Monitor than Accel bought in the Atlassian case.

Firstly and most obviously, a massive congratulations must go to the Campaign Monitor guys. I’ve been aware of them for some time and it’s been obvious for some time that the company had the “it” factor needed to achieve global scale. Delimiter uses Mailchimp for our (quite large) email newsletter, but I have evaluated Campaign Monitor a number of times, and will do so again. If the company can do enough to win my business then I will switch away.

It’s just great to see an Australian business achieving this way, and I wish its founders well.

However, secondly, it is also important to note that, as we’ve seen in past similar cases (especially Atlassian, which recently handed off another parcel of stock to US investors), it is really not Australians who will benefit by and large from Campaign Monitor’s success. I know the venture capital market is small in Australia and could not support a US$250 million investment of this level, but at the level that Campaign Monitor is playing at, I strongly suspect that the company could have attracted interest from quite a few large Australian investment groups.

The fact that the company has gone offshore for the entirety of this deal mans that if Campaign Monitor eventually is bought out or lists its stock publicly, most of the financial benefits from that deal will also go offshore, lining the pockets of the already wealthy US venture capital industry even more.

Industry wisdom is currently that it is only through working with big US venture capital firms that Australian IT startups are able to gain the experience and exposure to take their businesses global, as Atlassian has already done and as Campaign Monitor is now seeking to do.

However, I must also point out that with an investment round the size that Campaign Monitor picked up here, it is quite possible to work with multiple investors, including some based in Australia and some based in the US. This would have had the benefit of bolstering the Australian IT investment ecosystem with Campaign Monitor’s long-term growth while the company could also take advantage of US corporate expertise.

I know I whine and complain about this issue constantly. But I have been a technology journalist for a long time, and I’ve seen the same cycle repeating itself constantly for the past decade and more in Australia. It is our national habit to growth great technology companies and then to sell them off to the Americans. In some ways the strategy is a good one, given that it means entrepreneurs such as Greiner and Richardson are then able to become Australia-based investors in other companies, using their new funds.

But in a wider sense it also continually undercuts the Australian IT startup investment ecosystem, and hence the development of that ecosystem. I’m a little tired of seeing great Australian companies sold to US firms. Australian IT startups such as Freelancer have started to push back on that trend a little recently, choosing to list in Australia in a way that benefits Australian investors and attracts more to the IT sector. I apologise sincerely for preaching, but I’d like to see that practice taken a little more seriously by the next generation of IT startup entrepreneurs. Money isn’t everything ;) Especially when it comes in these amounts.