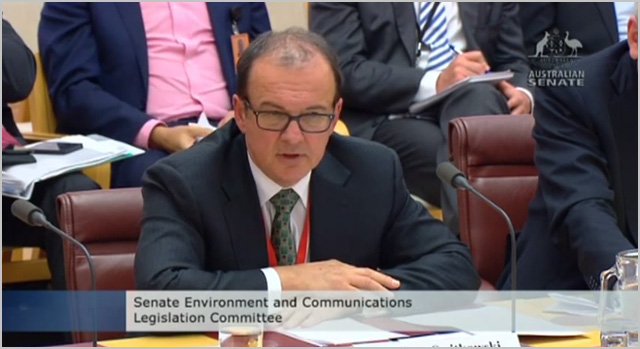 news New NBN Co executive chairman Ziggy Switkowski has questioned the need for ordinary households in Australia to have access to 100Mbps broadband speeds, telling a Senate Estimates session this week that a “whole lot of assumptions” needed to be pushed to their limits to demonstrate how such speeds would be used.

Most Australians who currently access broadband in their home use ADSL2+ infrastructure, which only allows speeds up to 24Mbps, although most are only able to achieve significantly lower speeds between 10Mbps and 15Mbps, due to their distance from their local telephone exchange. Telstra and Optus have made higher speeds ranging up to 100Mbps available through their HFC cable networks more widely available, although few have so far taken up the higher priced services.

However, as the NBN’s fibre infrastructure has gradually been rolled out around Australia over the past several years, users have shown a strong desire to upgrade their broadband speeds to take advantage of the new connections.

In October 2012, for example, the National Broadband Network Company revealed that 44 percent of NBN customers signed up so far at that point had opted for the company’s fasted 100Mbps speed tier, instead of opting for lower speed 50Mbps, 25Mbps or 12Mbps tiers. In addition, a survey released in June 2012 showed that 85 percent of Australian consumers want to be able to connect to the Internet at speeds of 50Mbps and higher.

Despite these facts, in a Senate Estimates hearing in Canberra this week (YouTube video online here), new NBN Co executive chairman Ziggy Switkowski played down the need for 100Mbps speeds amongst the Australian population.

“Athe moment, you need to stress a whole lot of assumptions to demonstrate how a normal household would use a 100Mbps broadband service, through the various devices and applications that are normally found in today’s and tomorrow’s household,” the executive said.

Switkowski was responding to a series of questions from Greens Senator and Communications Spokesperson Scott Ludlam relating to whether the Government’s preferred Fibre to the Node NBN deployment style would be obsolete before it was completed.

“When the expert panel was revieiwng the first iteration of the NBN,” said Ludlam, referring to the first NBN expert panel which examined Labor’s first NBN plan back in 2009, “the panel came back with the finding that a FTTN network would be effectively obsolete on the day it was built, and you would eventually need to overbuild the nodes and go all the way to the premises. What’s your understanding of the upgrade path for a FTTN once it’s built: How much of that network architecture is reusable in a FTTP world?”

Switkowski said the question would be addressed as part of NBN Co’s upcoming Strategic Review, but that in general, to answer the question you’d need to contemplate what the outlook would be for a FTTN architecture, and “at what point and for what reason would an upgrade be advised”, and could a FTTN network “for a considerable time satisfy the needs of Australian users”.

“The upgrade path for a FTTN network takes you through 10-25Mbps to 80Mbps, and then if you want to go to [the G.Fast standard], hundreds of megabits per second in the years ahead,” the NBN Co executive chairman said.

“Maybe I would rephrase the question if for the next decade, which is probably as far as one can think reasonably, there would be a situation where a significant upgrade from FTTN to FTTP would be requred, there’s a good chance the answer is no,” said Switkowski.

Ludlam pointed out that a FTTN network would never be able to provide gigabit per second speeds, as NBN Co’s existing Fibre to the Premises network will be capable of.
“I understand why you would say that, but it is interesting at the moment some copper-based technologies are being demonstrated which are getting very close to a gigabit per second,” replied Switkowski. “I agree it;s impressive and it’s yet to be built out in scale, on the other hand, I’d ask the question: What’s significiant about a gigabit per second?”

Ludlam responded to this question by stating: “The same thing that is significant about upgrading to broadband 10 years ago.”

“I’m really glad I’m not stuck on a dial-up service, that the government didn’t strand me on a network that would only strand me on dial-up speeds,” the Greens Senator said. “I’m glad that didn’t happen and I fear that’s what we’re going to be building over the next 4 or 5 years, is the equivalent of strending 70-80 percent of the population on dial-up.”

Additionally, the Senator stated that it would be have been impossible to anticipate in 1995 what a household would be able to do with the 25Mbps services available today.

“In 1995, neither you nor I could have picked what was relevant in this industry in 2005,” replied Switkowski. “I know that for a fact because I was around at the time. In 2005 and 2003 we would have missed 2013 by a very, very wide margin. We’ve got to be very careful about making decisions today that have associated with them today enormous costs and enormous execution challenges because we think that in 10 years time there’s going to be particular applications required for just that delivery.”

The NBN Co executive chairman’s comments appear to be very similar to comments made by Communications Minister Malcolm Turnbull, while in Opposition.

In August 2010, the Liberal MP told a forum in his seat of Wentworth: “The reality is, there simply isn’t demand at the household and every small business level for internet at that speed, at a price which would make it even remotely financially viable.

Turnbull said the market for universal 100Mbps fibre internet was not there – but there was explosive demand for wireless broadband – at which point he held up his Apple iPad device, on which he had been Twittering during the forum proceedings. “This requires a very different sort of architecture,” Turnbull said of wireless broadband.

At the launch of the Coalition’s NBN policy in April 2009, then-Opposition Leader Tony Abbott stated that 25Mbps broadband services was enough for home usage. “We are absolutely confident 25 megs is going to be enough — more than enough — for the average household,” Abbott told the audience.