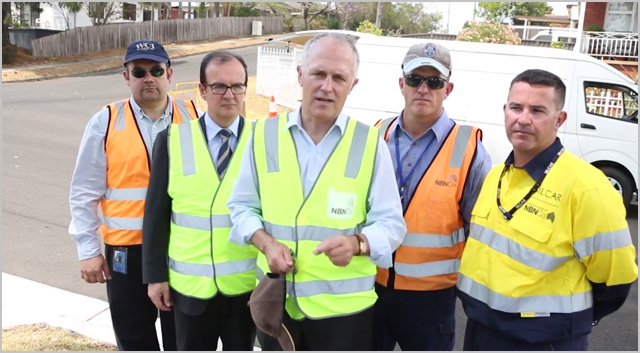 news Communications Minister Malcolm Turnbull has created a promotional video stemming from an official site visit to a NBN rollout zone in the Sydney suburb of Blacktown in what appears to be an attempt to reassure Australians that Labor’s National Broadband Network project is proceeding apace, but without inviting the media to pose questions at the event.

In the video, available on Turnbull’s personal YouTube channel but not promoted through Turnbull’s ministerial website, the Liberal MP speaks directly to the camera from the Blacktown NBN site, stating that the Fibre to the Premises infrastructure promised Australians under Labor’s NBN vision is still currently being rolled out.

“We’re seeing people preparing pits and splicing and examining the network architecture,” said Turnbull, flanked in the video by staff from NBN Co, including the company’s new Coalition-appointed executive chairman Ziggy Switkowski, as well as contractors from construction firm Silcar, which is deploying the NBN in Western Sydney.

“The NBN Co is proceeding. 12,000 premises were passed last week. We have issued design instructions for more premises, twice as many premises to be passed by June 30 next year as the NBN has passed to date. The proposition that the rollout is being stopped or slowed is simply not correct.”

“We’re very committed to ensuring that all Australians have access to very fast broadband — much of it will be fibre to the premises, more will be fibre to the ndoe or fibre to the cabinet in brownfield locations, but what we’ll be doing is to use the best, fastest, most affordable and cost-effective technologies in the appropriate place to get the end result of all Australians having access to very fast broadband.”

It was common for Labor Senator Stephen Conroy, who is regarded as the founder of the NBN project and who held the Communications Minister post for five years from late 2007, to hold site visits to NBN construction zones. On such occasions, it was common for the Minister to invite journalists to attend such visits and launches — both from local media outlets as well as national mainstream media and the dedicated technology press.

However, it does not appear as though any media was invited to attend Turnbull’s site visit last week in Blacktown, or if the Minister took questions on the NBN rollout in the area. The result is that Turnbull’s video on the issue has an extremely positive tone and does not address criticism of the Coalition’s re-shaping of the NBN project.

Turnbull’s approach to the issue marks the second time in the past several weeks that the Communications Minister has avoided taking questions from the media on the issue of the NBN.

In mid-October, the Financial Review and The Australian newspapers revealed that several former Telstra executives with close personal connections to Turnbull have been appointed to assist NBN Co with a Strategic Review of its current and potential future models for deploying the National Broadband Network. The two executives are JB Rousselot and Justin Milne.

Shortly after the appointments were revealed, Turnbull attended an event in the Sydney suburb of Paddington to launch a new technology startup incubator space formed by Telstra. However, the Minister did not take questions after speaking at the event. Given the fact that technology journalists from most major media outlets were present at the event, Delimiter requested Turnbull hold a brief doorstop interview following the proceedings to address the reported appointments of Milne and Rousselot to NBN Co, as well as other matters.

It is normal behaviour for Ministers to take questions briefly in doorstop interviews after events of this nature attended by the media, and Turnbull has done so regularly in the past. However, the request was declined, with Turnbull’s spokesperson citing time pressures, and Turnbull left very shortly after the formal section of the Telstra event was over.

The news comes as Prime Minister Tony Abbott has reportedly imposed a media blackout on Ministers such as Turnbull commenting to the media or granting interviews on issues in their portfolio, unless they get permission from the Office of the Prime Minister.

While in Opposition, Turnbull lampooned the then-Labor administration of the Federal Government for creating positive promotional material with respect to the NBN. In July 2012, Stephen Conroy’s broadband department created its own tabloid-style print newspaper, which was to be distributed to Australian residences and businesses in an effort to continue educating local communities about the benefit of the NBN.

“Now I don’t know whether Stephen Conroy or [NBN Co CEO] Mike Quigley would pass the public interest test which they’re proposing to apply to the rest of the media,” Turnbull said at the time in a satirical video. “After all, there seems a distinct lack of balance in this newspaper about the NBN. I can’t see anything in here about them missing their forecasts, or the blowout in costs, and there’s no mention of any of the criticisms which I’ve been making about it. It does seem very one-sided.”