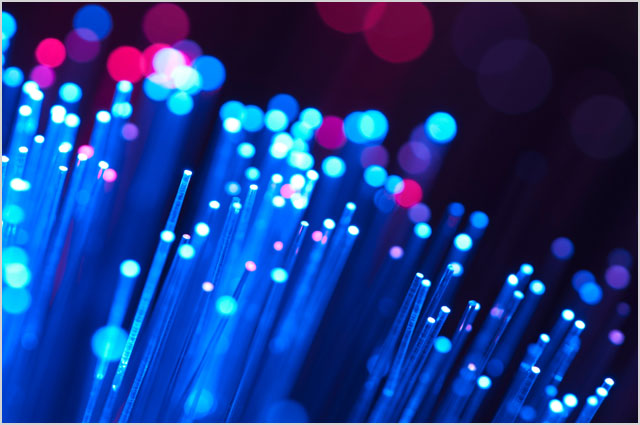 This article is by Rod Tucker, director of the Institute for a Broadband-Enabled Society at the University of Melbourne. It originally appeared on The Conversation.

analysis Broadband – in the shape of the National Broadband Network (NBN) – remains a key point of difference between Labor and the Coalition’s policies going into the federal election.

Our politicians are not paying lip service when it comes to these differences. There are significant variations in cost, in delivery types, in download and upload speeds, in business opportunities, customer experience and the so-called “future-proofing” of the network, depending on which version of the NBN we continue with. So what are they, and what do you need to know?

At the 2010 election, Opposition leader Tony Abbott threatened to scrap the NBN. But under Malcolm Turnbull’s deft handling of the Shadow Communications Minister’s portfolio, the Coalition’s Broadband Policy, released in April this year, recognises the need for a national, wholesale broadband network and shares many characteristics with the existing NBN model as conceived under Labor.

As with Labor’s NBN, an NBN under the Coalition will be a wholesale network, open to any retail service provider that can connect to the network. There are some differences in pricing strategies between the two policies, primarily around whether prices are uniform across the country (as in the Labor policy) or capped (as in the Coalition’s policy) but the service model is broadly the same.

Both Labor and the Coalition will use newly-launched satellites to take broadband to remote areas, and fixed wireless to cover rural areas, where wired access such as fibre or copper is either technically unfeasible or economically unviable. But the key difference between the two policies is the network technology to be used in urban areas.

Labor will continue rolling out a Fibre to the Premises (FTTP) network – whereby optic fibre extends all the way to homes and businesses – while the Coalition policy calls for a shift to Fibre to the Node (FTTN) – whereby fibre is delivered to local “cabinets”, called nodes, and copper wire runs from these nodes to houses and businesses – in brownfield sites (i.e. established urban areas); and FTTP in greenfield sites (i.e. new housing estates).

Despite some delays in the rollout of Labor’s FTTP network, NBNCo – the company tasked with building NBN infrastructure – says the completion date for the project remains fixed at 2021, and that the total cost will be A$44.1 billion.

In essence, the Coalition’s FTTN network will cost two-thirds as much as Labor’s FTTP network, based on the official cost estimates in each policy, but will be only one-twentieth as fast.

Labor’s FTTP network will provide upload speeds of 400 Mbps – 40 times faster than FTTN. Upload speed is important for activities which require you to send data from your computer, such as video calls. The speed difference between the two networks comes down to the fact the Coalition’s FTTN model relies on the existing copper connections between the node and the premises, while in Labor’s FTTP network, the entire connection is by fibre.

The table below summarises some of the key differences between policies: 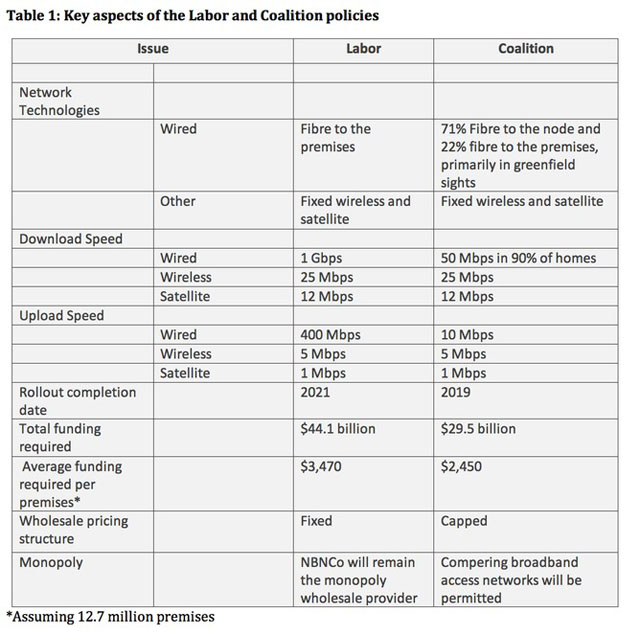 In recent years, engineers in laboratories around the world have developed technological marvels to extract the maximum capacity out of copper, and these marvels are to be incorporated in the Coalition’s network using very-high-bit-rate digital subscriber line (VDSL) technology.

VDSL’s higher speeds result from the use of different bands of frequency to voice calls, allowing data for multiple applications (such as internet connection and high-definition television) to be transmitted on the same copper wires. It builds upon – and is faster than – current technology used in asymmetric digital subscriber line (ADSL) networks.

Additionally, with VDSL in FTTN networks, the further the premises are located from the node, the slower the speed. In addition, the speed can be degraded if water gets into the cables after heavy rain – as some users notice in today’s ADSL network.

While few households need 1Gbps today (the average internet connection speed in Australia is currently 4.2 Mbps) the historical demand for broadband network bandwidth has grown at about 30% – 40% per annum.

Today’s ADSL2+ network provides around 10-20 Mbps and many households find this to be barely sufficient, especially when two or three family members simultaneously access high-bandwidth applications, such as video on demand, gaming, or various kinds of home office applications.

Using historical growth figures, and allowing for future generations of ultra-high definition television, multi-view services, together with multiple TV displays in a single household, in-home video conferencing and so on, it’s likely that domestic broadband domestic customers will be seeking bandwidths of more than 100 Mbps by 2020 and about 1 Gbps by 2035. 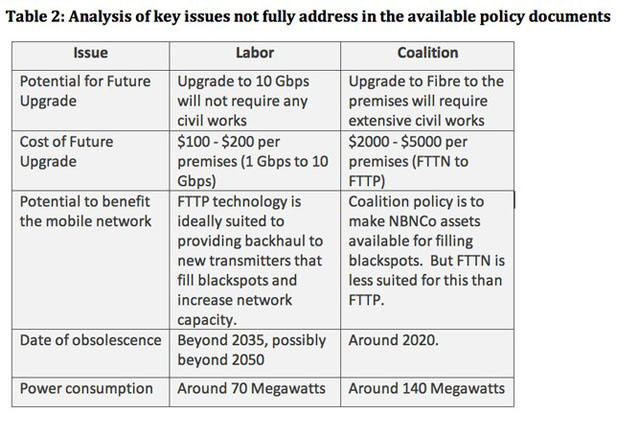 Many business customers will require these bandwidths much sooner, as they begin to take full advantage of new broadband applications and services, and to develop innovative new online products. Historically, the development of applications tends to follow the provision of infrastructure. Applications that use increased speed tend to be developed only when those speeds are in existence or imminent.

Based on these numbers, the Coalition’s FTTN network will be obsolete by 2020, and will require major expensive upgrades after this. While it’s possible telecommunications engineers may find ways to squeeze a little bit more speed out of copper, the only way to move beyond the speed limitations of FTTN is to move the nodes closer to the home. In practice, this ultimately means an upgrade from FTTN to FTTP.

For those who need more than 50 Mbps from the FTTN network, the Coalition’s policy provides for a “fibre-on-demand” upgrade path, in which a customer pays for a fibre to be installed from the node in the street to the premises.

The cost of this to the individual could be in the region of A$1,000-A$5,000, depending on the distance of the node from the premises. Future upgrades of Labor’s FTTP to 10 Gbps and beyond will require simple exchange of the user terminal in the home, at a cost typically in the region of A$100-A$200.

The Coalition’s “fibre-on-demand” strategy raises the spectre of a digital divide between households, businesses and regions that can afford to pay for the upgrade and those that cannot.

To illustrate this, a graphic design business that uploads and downloads data to its customers, and happens to be located close to a node, will be in a much better business position that a competitor 500 metres down the road. This will arguably impede the economic benefits of the network as a whole, limiting the application of health, education and productivity-boosting applications.

This will mean the saving of A$1,000 per premise offered by the Coalition could easily be wiped out by the loss of long-term economic benefits of a high-capacity FTTP network.

Some commentators have argued the increasing popularity of mobile devices such as smartphones and tablets decreases the need for the NBN.

But a FTTP broadband network will facilitate this rapid growth in mobile broadband. Telephone companies around the world are now enhancing their mobile networks with an ever-increasing number of small wireless base stations located on street corners, in shopping centres, offices, and even in customers’ homes, using fibre connections from the small base stations to their network.

While NBNCo is not yet offering backhaul services (transporting data to a point that would allow it to be be distributed over a network) to mobile operators, Labor’s FTTP network is ideally suited for this. Because the Coalition’s FTTN network relies on existing copper cable to the home, it is generally unsuitable for wireless backhaul.

The cost of this extra power is relatively small compared with the installation cost of the network, and this comparison does not include end-user devices such as computers and TV displays. But the increased electrical power consumption of the Coalition’s FTTN network will have a greenhouse impact approaching that of a city the size of Launceston in Tasmania.

The Coalition’s broadband policy offers a lower-cost network that will provide customers with modest improvements in broadband services in the shorter term; whereas the Coalition’s network will create a new digital divide and require major upgrades soon after it is completed. The cost difference between these two alternatives is about A$1,000 per premises.

Labor promises a more future-proof solution that will cost more at the outset, but will stimulate broadband developments in government, business, and entertainment, and has potential to serve Australia beyond 2050.

A version of this article was published on the University of Melbourne’s Election Watch 2013 website. Rod Tucker's research is financially supported by the Australian Research Council, Alcatel-Lucent, and the Victorian Government. The Institute for a Broadband-Enabled Society has received cash and in kind support from a range of companies including Optus, NBN Co, Ericsson, Microsoft, Cisco and Google, through its industry partner program and research collaborations.