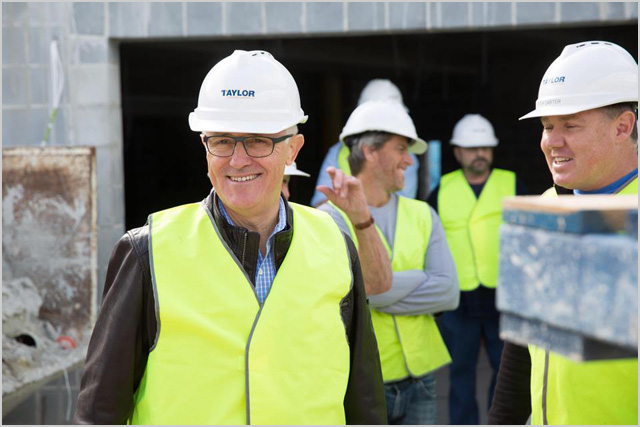 Note: This article initially stated that Shadow Communications Minister Malcolm Turnbull had declined to ask the Parliamentary Budget Office to cost the Coalition’s NBN policy. This was untrue: Turnbull did approach the PBO with the policy. Delimiter’s opinion/analysis section on this issue has subsequently been heavily modified.

news The Parliamentary Budget Office has decided the Coalition’s National Broadband Network policy is too complex to formally cost without significant and expensive outside assistance, leaving the veracity of the policy unclear, in the absence of government or private sector examination of it.

Last night on Twitter, Turnbull ridiculed Communications Minister Anthony Albanese for his statement in the pair’s Lateline debate this week that consulting firm KPMG had examined NBN Co’s corporate plan and found that all of its assumptions were “good”. “Don’t believe KPMG approved the NBN business plan, but if they did it raises very big liability issues if Government relied on them,” said Turnbull. “Time to clarify?”

In response to Turnbull’s claim, Simon Banks, director of government relations firm Hawker Britton, which is closely aligned with the Labor Party, asked Turnbull whether the Liberal MP had submitted his broadband plan to the independent Parliamentary Budget Office for costing. The PBO was founded in July last year, and holds responsibility for preparing costings of publicly announced policies on request by authorised members of Parliament.

The role of the PBO is especially important during an election, when many new policies are released. In an effort to provide transparency around the Coalition’s policies, in November 2012 Shadow Treasurer stated that the Coalition would submit all of its policies to the PBO for consideration, with final costings to be released in the last week of the election.

However, Turnbull posted on Twitter: “Not avoiding it. PBO didn’t have or claim to have technical expertise on NBN engineering issues.” In response, Banks posted: “Thank you, @turnbullmalcolm for admitting that there will be no independent PBO costing of NBN Co.”

As a side note, Albanese appears to be correct in that KPMG did examine NBN Co’s initial business plan. A report produced by the firm, along with fellow consulting group McKinsey, was released in May 2010 which closely examined the Government’s approach to the NBN. In general, the report found that the Government’s NBN plan was viable, but also made a number of key recommendations on how it could be improved.

Telecommunications industry worker and commentator Michael Wyres, commented on his blog this morning (we recommend you click here for the full article) that Turnbull was in effect saying he wouldn’t submit the Coalition’s NBN policy to the PBO, because Turnbull believed the PBO didn’t have the ability to evaluate the policy.

“What Turnbull should do is submit it, and let the PBO decide how to handle it,” wrote Wyres. “I’m sure a parliamentary department has the ability to find someone with the ability to make judgements on the policy and its submitted costings. Given the PBO has until thirty days after the election to produce its report on costing for submitted policies, they even have plenty of time to do the work. Frankly, it is just a complete cop out.”

Wyres additionally pointed out that Turnbull had consistently called for the Federal Government to audit the NBN, and had committed the Coalition to a number of examinations of the NBN project as a whole, if it wins power in the upcoming Federal Election. “Turnbull should commit to the same financial standards that he wishes everyone else to commit to,” wrote Wyres. “It certainly appears that what is good for the gander, is not good for the goose.”

However, it subsequently emerged that Turnbull had approached the PBO. Parliamentary Budget Officer Phil Bowen confirmed the Liberal MP had approached the PBO with the policy, but that the PBO had decided the highly technical policy would need significant and expensive outside assistance to examine. Some have argued this afternoon on Twitter, in response to the issue, that Turnbull should have the policy costed by a private sector organisation.

“Our plan has been out for more than 4 months. Nobody has published analysis faulting our assumptions or conclusions,” responded Turnbull.

The news comes as the Coalition continues to come under attack by Labor in general over its refusal to release detailed costings for its policies. In a media release yesterday, Finance Minister Penny Wong pointed out a number of public comments by Shadow Treasurer Joe Hockey in which the Liberal MP confirmed the Coalition had undertaken costings exercises into its policies.

“With less than four weeks to go, it simply isn’t good enough to make Australians wait until the last minute to learn what the Liberals would cut from health and education and infrastructure,” said Wong. “Tony Abbott and Joe Hockey are trying every excuse they can to hide their $70 billion in cuts because they know that if they come clean, Australians would think twice about voting for them.”

“The [pre-election financial outlook] has been released. Their costings are done. There are no more excuses. It is time for Mr Abbott to tell Australians what $70 billion of cuts he plans to make if elected. And he needs to do it now.”

opinion/analysis
Hmm. This is an interesting one. It looks like Turnbull did indeed ask the PBO to cost the Coalition’s NBN policy, but that the PBO, with its meagre resources, avoided the issue as too complex. This isn’t surprising. The two NBN policies we have at the moment are some of the most complex and technical government policies Australia has ever seen. It would indeed require significant work, by technical staff qualified in broadband rollouts, to examine the Coalition’s policy.

Should Turnbull get the policy costed by the private sector, at the Coalition’s own expense? A lot of people probably think the Liberal MP should — after all, if you want to make massive changes to Australia’s largest ever infrastructure project, a project which will see tens of billions of dollars of public money invested, then you had better have a good rationale for that. Personally, I believe that it would be a good thing, and add weight to the Coalition’s NBN case. However, I also don’t believe this is necessary.

Quite a few independent commentators have said that the Coalition’s NBN policy is viable, and it’s certainly massively more detailed than any other Opposition telecommunications policy I’ve ever seen. Turnbull and his team have done their homework here — at least enough to pass initial muster. A format audit of the policy would be nice, but I personally don’t think it’s necessary at this point.

For comparison, I encourage you to examine the FTTN-based NBN policy which Labor, then in Opposition, took to the 2007 election. In no way was it as detailed as the policy the Coalition has now.