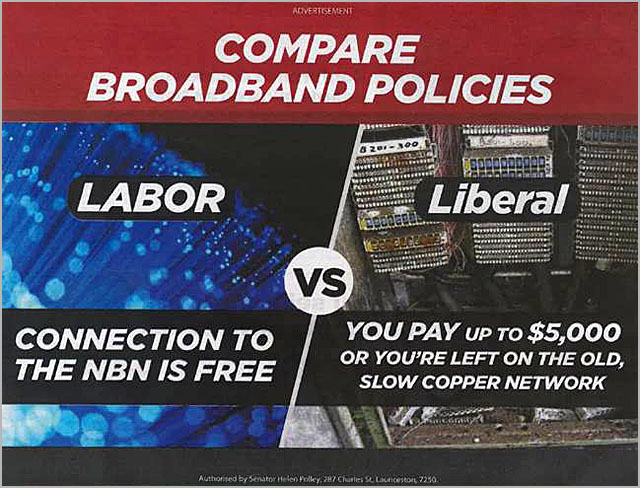 news A trio of Australia’s most prominent telecommunications analysts have reportedly backed complaints by the Coalition that much of Labor’s election campaign material about the National Broadband Network contains outright lies or otherwise misleading material.

Over the past several months, media outlets such as Delimiter and Politifact have repeatedly raised the issue that Labor MPs right around the nation have been distributing misleading election material regarding the NBN.

One of the key issues relates to the cost of connecting to the NBN under the Coalition’s rival NBN policy. The Coalition’s policy will see most of Australia covered by fibre to the node technology, where fibre is extended from telephone exchanges to neighbourhood ‘nodes’. The existing copper network will be used to deliver the last mile to home and business premises, but the rollout is expected to significantly boost broadband speeds and availability, with the Coalition pledging minimum speeds of 25Mbps by the end of its third year in office, if it wins the upcoming Federal Election.

Throughout the past several months, this has led a number of Australian Labor politicians, including then-Prime Minister Julia Gillard and then-Communications Minister Stephen Conroy, to claim that the cost of the Coalition’s FTTP on demand service will be $5,000, with the implication that unless Australians pay for this fibre extension cost, they will be getting broadband little better than that offered today on Telstra’s existing copper network.

However, the Coalition has strongly contested the claim, and in May, local fact-checking site Politifact agreed with Shadow Communications Minister Malcolm Turnbull that the claim wasn’t true. Despite this, Labor politicians around Australia have continued to claim that the cost of connecting to the Coalition’s version of the NBN will be $5,000.

“Some of the claims being made here are highly contestable and seemingly deliberately misleading,” said Tony Brown, a senior analyst at Informa Telecoms and Media. Other independent telecommunications experts, Paul Budde and David Kennedy, contradicted one or more of the claims in Labor’s NBN advertising.

Brown, Budde and Kennedy are considered to be three of Australia’s foremost analysts when it comes to the telecommunications industry, with the trio counting many decades of experience between them in the field. Budde runs his own telecommunications consultancy and analyst firm, while Kennedy has held a long-time interest in the sector which dates back to the 1997 telecommunications reform process. Brown works across the Asia-Pacific region and is considered a top expert on fibre networks specifically. They also represent broadly differing viewpoints on the NBN. Brown has been critical of some aspects of Labor’s NBN policy, while Budde has broadly supported it. Kennedy has taken a more middle of the road approach to the policy, praising some aspects but also noting its issues.

The comments of the analysts, added to existing criticisms of Labor’s NBN advertising material by Delimiter and Politifact, adds credibility to complaints by the Coalition about the material.

In early May, Shadow Communications Minister Malcolm Turnbull sharply criticised much of the material, and the Liberal MP has also written directly to the ACCC to complain about the issue, alleging potential breaches of the Trade Practices Act.

Similar to the misleading infographics distributed by Labor MPs over the past several months, an infographic published on the Facebook page of the Liberal Party of Australia misrepresents Labor’s policy. It conflates Labor’s initial, $4.7 billion policy outlined in 2007 with its reformed 2009 policy, falsely alleging a blowout from $4.7 billion to $90 billion in the project, and a decade-long project timetable extension.

opinion/analysis
I think it’s pretty conclusive at this point. When Delimiter, Politifact, The Sydney Morning Herald, Informa’s Tony Brown, Paul Budde, and Ovum’s David Kennedy all agree that there are questionable aspects to Labor’s current NBN election ad campaign, then it’s fairly clear that there is an issue to be addressed.

Is the Coalition blameless? Far from it. Turnbull and his fellow Opposition politicians have been constantly loose with the truth over the past several years, as I’ve highlighted constantly on Delimiter (see here and here for some great examples). However, this doesn’t justify this kind of outright misleading material from Labor. Both sides (and also the Greens and other minority parties) must be held accountable for their statements. This kind of fact-checking exercise is fundamental to the successful operation of any democracy.

I would also make one further note here with respect to this issue. Many readers have heavily criticised Delimiter’s coverage of this issue, claiming that we have been taking sides in this contentious debate, and that there are grounds to justify Labor’s ongoing claims with respect to the Coalition’s NBN policy. What the comments by these analysts in the SMH this morning, coupled with Politifact’s previous articles on the topic, show is that Delimiter far from being alone on this topic. When several fact-checking websites and a number of Australia’s top analysts — including those who have been broadly supportive of the NBN — agree that there’s an issue with Labor’s NBN election material, it would seem that there is, indeed, an issue.

I want to emphasise that Delimiter will staunchly defend its independence on these sorts of issues, and continue to fact-check and examine the statements made by every political party, no matter how much some readers may dislike that approach. I don’t care which NBN policy you support, facts are facts, and politicians shouldn’t be allowed to get away with making blatantly misleading statements in public. That much should be obvious to everyone.