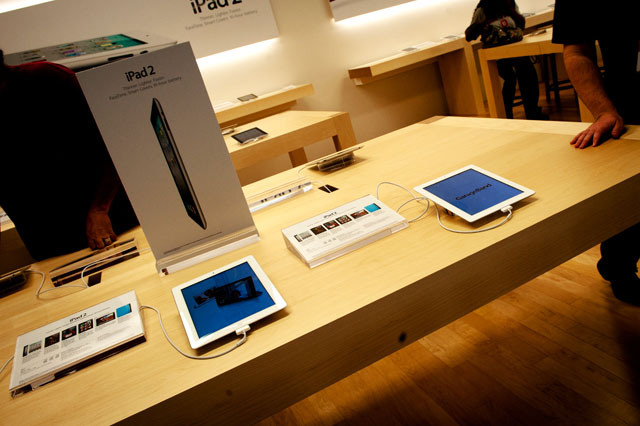 news Technology giant Apple has blamed copyright owners such as film and music studios for Australian price hikes on content sold through its iTunes digital store, despite politicians at the Parliament’s IT price hike inquiry pointing out to the company that its size as the world’s largest company by capitalisation gave it substantial market power.

The company has been severely criticised in Australia for the prices of some content sold through its iTunes store. For example, last week consumer advocacy group Choice pointed out that it cost Australians 70 percent more to buy local band AC/DC’s Back in Black album on iTunes than the same content costs in the US.

In a mandated attendance at the Federal Parliament’s ongoing inquiry into IT pricing last week (the PDF of the Hansard transcript is here), Apple Australia managing director Anthony King said the company had largely harmonised the pricing on its own products — ranging from the iPhone, iMac and iPad to software products such as iPhoto and iMovie — in Australia, with the goal of offering equivalent pricing globally. However, he said, Apple did not set pricing on third-party content sold through its iTunes store.

“As we have explained in person to the committee as well as in our written submission dated 6 July 2012, the retail pricing model for music, movies and TV shows made available on the iTunes store is different from the pricing model for Apple branded products,” King told the House Standing Committee on Infrastructure and Communications, which is holding the inquiry. “The iTunes store is a digital media store. Apple must pay the rights holders of the digital content—the record labels, movie studios and TV networks—to distribute content in each of the territories in which the iTunes store exists. The pricing of this digital content is based on the wholesale prices which are set through negotiated contracts with the record labels, movie studios and TV networks.”

“In Australia they have often set a higher wholesale price than the price of similar content in the United States. Nevertheless, our own market analysis suggests that the price of digital content sold on the iTunes store in Australia is comparable to other Australian physical and other online stores. This would indicate that the rights holders are offering competitors similar wholesale pricing.”

However, politicians on the committee, such as Labor MP Stephen Jones, pushed Apple hard on its claim that it wasn’t responsible for the issue of third-party content pricing. “You are the biggest players in the market, surely you have some influence over the wholesale prices that you are paying for your video and music content in Australia,” Jones told King.

And fellow Labor MP Ed Husic, who drove the setup of the inquiry, added: “Apple compared itself to JB Hi-Fi, but, with respect—if I can just play a role I am very comfortable with of a contrarian—JB Hi-Fi is not the largest company on the planet in terms of market capitalisation. Apple is. What is suggested here today, Mr King, is that Apple does not have the power to influence prices, that this is set by the record labels. But it a fact that there are three price points that are set in place and that Apple does have enormous market power to be able to influence it.”

“It may be lack of comprehension on my part, but I do not think anybody is really any wiser as to why it costs more for an Australian consumer to purchase an Australian artist than it does for a US consumer buying the same artist or track and yet Apple is saying that it cannot influence that.”

In response, King strongly continued to push the line that Apple did not set wholesale prices with respect to the Australian digital content market.

“We have seen the price of digital content slowly reduce in Australia,” said King. “We have seen that. We would love to see those prices continue to come down. I have made this statement several times: we would love to see lower prices for digital content—and that is not just music; it would include TV shows and movies. But the cards, so to speak, are in the hands of the folks who own the content. They are not in our hands to play. And so we would urge the committee to talk to the content owners, to understand why there may be differential pricing, because it is not a matter for us to control. We do not own the products, other folks own these products.”

Nationals MP Paul Neville added: “I am still bewildered as to why in the music and iTunes field Australia pays so much higher than other countries. You have said in evidence that the retail price bears a direct correlation to the wholesale price that you are being charged. As other members of the committee have said, you have enormous muscle at an international level. Have you ever challenged those companies on the wholesale price they are charging in Australia? What is your take on why they would single out Australia? If there is a direct correlation—and the other companies we are seeing today have had a similar experience—we are probably talking between only three and five per cent of the international market. Why would they single out Australia for special attention?”

In response, King said Apple would “love” to see the price of digital content being lowered in Australia, and it made that point to record labels as it met with those organisations on a continuous basis. “We have seen a slow but steady drop in digital content pricing in Australia over the last couple of years,” he said. “But your question is best directed at the guys who own the content and the music. They will be able to give you an answer to this question, I am sure.”

opinion/analysis
Apologies to Apple Australia managing director Anthony King, but I do not find the executive’s argument re: iTunes prices convincing in the least. It is very well known and very clear that Apple sets certain price points for all forms of content sold in its store; while it is true that third-parties who sell software and other forms of digital content such as eBooks, music and video content through iTunes do have some latitude to set their prices, arguing that Apple has no input into the process and that it’s solely a matter for the content owners is just flat out ridiculous.

If you go right back to the foundation of the iTunes store, as chronicled in his biography, it was then-Apple chief executive Steve Jobs who forced the music studios to the table with Apple’s pricing model at the time. I quote from Jobs’ biography:

“Jobs’s proposal was to sell digital songs for 99 cents — a simple and impulsive purchase. The record companies would get 70 cents of that.”

Right from the start, Apple took the prime role in negotiating prices to be set on the iTunes store for music, and although it is doubtless a complex negotiation between Apple and content owners, to imply, as King did, that Apple does not have a central role in setting such prices is just a flat out attempt to mislead the public and the politicians looking into the price hike issue.

There’s further evidence on this issue from a legal case involving Apple in the US. In April 2012, the US Department of Justice sued Apple and five of the nation’s largest book publishers of conspiring to raise eBook prices. As far as I’m aware, the other publishers, including Macmillan and Penguin, settled with the US DoJ, but Apple is still trying to fight the good fight and alleging it did nothing wrong. Clearly the US Department of Justice believes Apple had a fundamental role in setting prices in the eBook market in the US.

As the MPs in the inquiry pointed out to Apple, the company is likely the world’s largest buyer of digital music from a wholesale perspective, and has enormous power over digital content producers. As it was pointed out, if you’re not on iTunes, you’re not visible these days as a musician, and Apple holds the power over who and who does not appear on that marketplace, as well as setting the structures and likely often the details of how prices are set there.

Some people may think I’m being a little too harsh here. But when the world’s largest corporation alleges it has nothing to do with prices set on its online marketplace — despite direct evidence to the contrary, as admitted by its founder in his globally read biography — what are we supposed to say? King is aware that Apple has a huge role in setting prices in iTunes. Sure, it’s not all Apple’s fault, but the claim that all the blame lies on the side of the copyright holders is just flat out not credible.