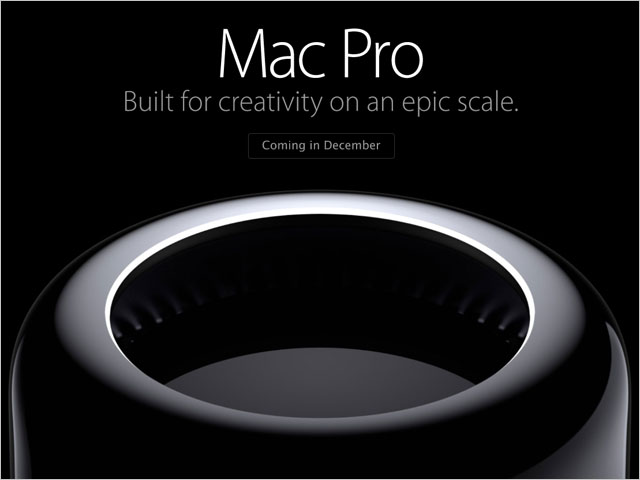 news Iconic technology giant Apple has applied a substantial markup on the Australian price of its new Mac Pro professional workstation computer compared with the machine’s US prices, with Australians to pay hundreds of dollars more for exactly the same product when the unit goes on sale in December.

The new Mac Pro differs radically from the previous generation of products in the line, featuring a circular new design arranged around what Apple describes as a “unified thermal core” that allows the Mac Pro to be more powerful than previous models, while also keeping the machine “unbelievably compact and quiet”. It also features the latest Intel Xeon E5 processor, which comes with up to 12 cores, as well as dual graphics chips from AMD, faster PCIe-based flash storage, and Apple’s Thunderbolt 2 standard connections, which allow high-resolution displays to be daisy chained to the unit.

“The new Mac Pro is our vision for the future of the pro desktop, everything about it has been reimagined and there has never been anything like it,” said Philip Schiller, Apple’s senior vice president of Worldwide Marketing, in a statement this morning.

However, Apple has also priced the unit substantially different in Australia compared with its pricing in the US. In the US, Apple announced overnight that the new Mac Pro will start at US$2,999 (AU$3,081) for the quad-core model, or US$3,999 (AU$4,108)for the six-core model. The Mac Pro is also customisable, and it is expected that many customers will end up paying more than those sums for the unit.

In Australia, customers will pay AU$3,999 for the quad-core model, or AU$5,299 for the six-core model, for buying the same hardware. This represents a markup of between 17 and 18 percent of the US cost of the Mac Pro, once Australia’s 10 percent GST tax is taken out.

Queried about the issue, an Apple Australia spokesperson highlighted the fact that the Australian prices on the Mac Pro includes goods and sales tax, while the prices quoted on Apple’s media releases in the US did not. However, with GST in Australia being set at only 10 percent, the tax situation does not account for the whole price markup on the Mac Pro in Australia, with prices still remaining at 17 to 18 percent higher even after GST is taken into account.

Overnight, Apple also released Australian and US pricing on a variety of other devices, ranging from a new MacBook Pro with Retina display to new iPad Air and mini models. In general, each has had a smart markup ranging from $100 on most of the iPads to closer to $400 on high-end versions of the new MacBook Pro. Again, GST in Australia accounts for some, but not all, of the price differential.

The price hike activity on the Mac Pro reverses a trend seen in Apple’s pricing over the past year, where the company has appeared to be broadly harmonising prices on some of its products. For example, in June 2012, the company releases new MacBook models, featuring a small markup of only between 10 percent and 13 percent on the models.

In the foreword to the report, Committee chair Nick Champion noted that the importance of IT products to every sector of Australian society “can hardly be overstated”. “IT products are woven into the fabric of our economy and society, and have driven rapid change in the way Australians communicate, the way we work, and the way we live,” the Labor MP noted.

However, Champion added, the committee hearings held over the past year had found that Australian consumers and businesses must often pay between 50 and 100 percent more than those residing in other countries for the same products.

“Evidence presented to this inquiry left little doubt about the extent and depth of concern about IT pricing in Australia. Consumers are clearly perplexed, frustrated and angered by the experience of paying higher prices for IT products than consumers in comparable countries,” Champion added. “High IT prices make it harder for Australian businesses to compete internationally and can be a significant barrier to access and participation for disadvantaged Australians (in particular Australians with a disability).”

“Based on the evidence received over a 12 month inquiry, the Committee has concluded that in many cases, the price differences for IT products cannot be explained by the cost of doing business in Australia. Particularly when it comes to digitally delivered content, the Committee concluded that many IT products are more expensive in Australia because of regional pricing strategies implemented by major vendors and copyright holders. Consumers often refer to these pricing strategies as the ‘Australia tax’.”

The report made a variety of recommendations to address the issue, ranging from the Australian Bureau of Statistics developing a program to monitor prices, that parallel importation restrictions be lifted, and that so-called technological protection measures on digital content be lifted. In addition, the Committee recommended that the Government investigate options by which it could educate consumers on how to actively avoid ‘geo-blocking’ of content.

The Federal Government has not yet responded to the report’s recommendations.

opinion/analysis
Apple’s price hike on its Mac Pro unit is clearly illegitimate. I think most Australians are happy to wear price hikes of 5 percent, 10 percent, even potentially something as high as 15 percent. But the prices we’ve seen publicised today on Apple’s Mac Pro line (if you take tax out of the equation) are as high as 17 to 18 percent higher than the same units being sold in the US. And that’s just not cricket. Costs are higher in Australia than in the US — but not that much higher, especially when you’re a company with the economies of scale which Apple has built.