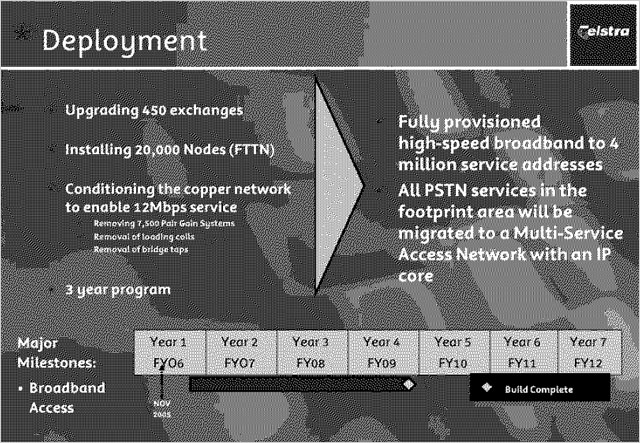 news One of Australia’s most respected telecommunications analysts this week called for the nation’s politicians to show “leadership” when it comes to national telecommunications infrastructure, arguing out that further cost/benefit analysis conducted on the sector would constitute further ‘procrastination’, after dozens of such studies have already been conducted.

The concept of Australia building a ‘national broadband network’ of some kind was first raised back in late 2005, when then-Telstra chief executive Sol Trujillo proposed to the Federal Government that it help the telco to fund a national upgrade of its copper telephony network to support so-called fibre to the node infrastructure. Since that time, the two major sides of Australian politics have been locked in a bitter struggle over what the future of national telecommunications infrastructure should look like locally.

Currently, the Labor Federal Government is pursuing a fibre to the home strategy, where Telstra’s copper network will gradually be replaced with fibre, and several competing hybrid-fibre coaxial cable networks will be shut down. Rural areas will be served with a combination of satellite and wireless infrastructure. In contract, the current Coalition Opposition is proposing that it would place the current Labor NBN rollout on ice if it took Government at the next Federal Election, while it commissioned the Productivity Commission to conduct a cost/benefit analysis into the best way to provide fast broadband to Australia. The Coalition broadly favours a fibre to the node-style rollout of the type first proposed by Trujillo seven years ago.

However, in a lengthy blog post published yesterday, local telecommunications analyst Paul Budde argued that further study in this area would only serve to delay necessary infrastructure. “What is needed from politicians and other decision-makers is leadership. We elect or appoint these people to come up with innovative solutions that enable us to advance as a society,” he wrote.

“During the previous government (1996-2007) 25 Inquiries were undertaken in telecoms, without any progress being made on their structural recommendations. This is a typical example of procrastination. And in that process Telstra became so dominant that the ACCC indicated it had become increasingly difficult to regulate. Subsequent decisions made by the new government in relation to the policies surrounding the NBN need to be judged against that background and that reality.”

“Leadership also means daring to take decisions and sticking to them. If needed, the NBN policy provides NBN Co and the parliament with means to make changes where and when it makes sense and some of these changes have already been made. There is no shame attached to recognising the need to make adjustments. Supported by a solid vision and strategy NBN policies should not be dogmatic; the market is far too dynamic for that. However, changing the original vision and strategy based on politics or the interests of vested interests is not good leadership.”

Budde write that he was not saying that cost/benefit analyses were useless or that they should not be undertaken – but he was arguing for a balanced approach between vision and leadership on the one hand, and conservative management of the issues on the other.

“One can argue endlessly about what technologies should be applied and at what cost, but I believe that – once sound policies decision have been made, clearly articulating for what purposes the NBN will be built – it is best to leave the technical decisions to the experts. International telecoms experts unanimously agree that an FttH network is the best future-proof solution. One can debate about whether it is needed in 5,10,15 or 20 years – and again that depends on some of the differences between countries as mentioned above – but in the end FttH is the best final solution for all urban and many regional premises.”

“Nobody has a crystal ball capable of making a truly reliable CBA for the next decade. If we have to depend on that, along with the endless arguments about the hundreds of possible scenarios that might ensue, we will continue to procrastinate.”

opinion/analysis
Right now, you’re probably thinking something like: “These comments by Paul Budde are all very well and good, Renai, but what the hell is that godawful-looking image at the top of the article, which appears to have been dragged from the history records?” And it’d be a valid question.

That image is taken from a Telstra presentation given by its management under then-chief executive office Sol Trujillo to the media and analysts in November 2005, as Trujillo and his team (which included current Telstra chief executive David Thodey) outlined their plans to reform Telstra from top to bottom – from network infrastructure to IT systems, from its marketing strategy to its product set.

It details Telstra’s plan at the time – famously subject to regulatory approval by the Federal Government – to massively upgrade its existing copper network to use fibre to the node technology, rolling out 20,000 ‘nodes’ around Australia and deliver a guaranteed 12Mbps broadband speed to some four million Australian premises. The rollout was slated to begin in November 2005 and would have been finished threeish years later – in 2009.

Now, its important to realise that nearly every other aspect of Trujillo’s visionary plan for Telstra went ahead. The company did massively overhaul its IT systems. It did build an entire new 3G mobile broadband network – the same one which millions of Australians rely on today. It did overhaul its marketing and product strategies. In fact, almost every aspect of Telstra was rejuvenated under Trujillo’s leadership.

Except one. And I’m betting you can guess which one.

Yeap. If Trujillo’s plan in 2005 – seven years ago – had gone ahead, then millions of Australians would likely be already receiving the sorts of FTTN speeds which Shadow Communications Malcolm Turnbull likes to talk about when it comes to broadband – speeds of at least 12Mbps but more likely closer to 60Mbps or even 80Mbps, as the FTTN nodes were upgraded to support such speeds.

However, the then-Howard Coalition Government, with Liberal Senator Helen Coonan leading the communications portfolio as Minister of the day, knocked back the plan, leading to an incessant back and forth debate about the future of Australian fixed-line telecommunications infrastructure which would plague Australia literally for the next seven years. For most of the past decade, Australian politicians have been arguing about this issue – and there’s no clear resolution in sight, given the stark disagreements which politicians such as Communications Minister Stephen Conroy, and his shadow, Turnbull, have about this issue.

I post the image above not to demonstrate that I agree that Trujillo’s FTTN plan was the best one available – it wasn’t. It was an inherently selfish and opportunistic land grab that would have allowed Telstra to entrench its position as a vertically integrated fixed-line telecommunications player. And it would have laid waste to the investments which rivals such as iiNet, Optus and TPG had made in competitive ADSL infrastructure.

However, at least Trujillo was willing to lay down some cash and do something about the issue – to actually focus on providing better broadband services to Australians. Under Trujillo’s plan, Australia would have had a national FTTN network in 2009. 2009! That’s three years ago! Three years in which Australia’s two major sides of politics have suffered a crisis in their ability to agree about almost anything when it comes to the future of fixed-line telecommunications in Australia. That’s the cost Australia is paying constantly for their ongoing differences of opinion.

Paul Budde is 100 percent correct. Australia’s political class desperately needs to show leadership when it comes to the National Broadband Network. Well, to be correct, Labor is showing a great deal of leadership at the moment in this portfolio, even if it has been a bit brash about it at times. The Coalition needs to pull its socks up and work with Labor on a solution for Australia’s future. These kind of infrastructure projects require a decade or more to complete. And fundamental infrastructure is not an issue which should be tugged back and forth between governments every three years. This is one issue which needs to transcend Australia’s electoral cycle and all the petty bickering it engenders.