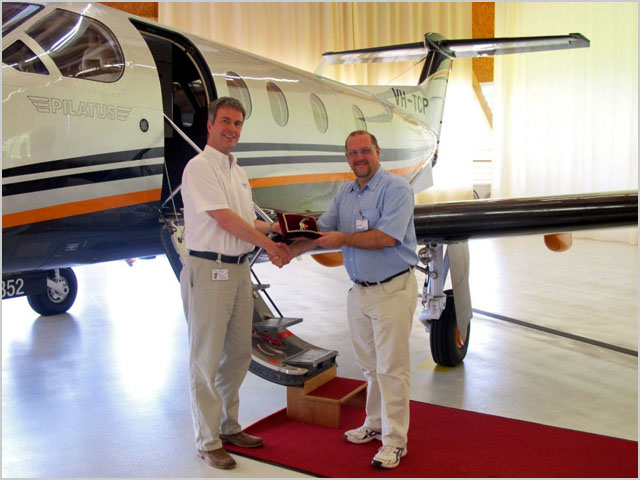 news Wondering what Simon Hackett would do with the millions of dollars he netted from the sale of his company Internode to iiNet? Wonder no more. The telco executive this week flew to Switzerland to buy a small nine seater plane (ten if you include the pilot) of the type usually used for corporations.

Hackett revealed the purchase in a number of posts on his blog this week and last, noting that he planned to “spend a few days visiting the factory (and Switzerland); inspect, accept, and locally fly my shiny new plane; install a few gadgets; and prepare to fly it back to Adelaide, Australia”.

The model the executive is buying is a Pilatus PC-12 (further information at the manufacturer’s site here). An extensive history of the single engine turboprop passenger plane can be found on Wikipedia. They appear to be commonly used as corporate planes to fly executives around the globe, but have also recently started being used as regional passenger planes in some countries. The US Air Force also uses the planes for some operations. Normally the model would run with six seats in the back and 2 in the front (including pilot) for a total of 8, but it can do a total of ten.

Hackett noted he plans to fly the plane home gradually, with a number of stops in countries ranging from Egypt to India, to Thailand, Vietnam and Bali, then Broome in Western Australia before heading home to Adelaide. He will be accompanied by his flight instructor. Hackett is an old hand at flying; having long been known for his interest in flying gliders around South Australia. The executive is also known for his interest in electric motor vehicles; especially the Tesla Roadster.

Hackett appears relatively happy with his purchase. After his first flight in the new bird, he wrote: “After the flight, we had a short handing over ceremony, red carpet and all. We did things slightly backward because we were still in the aircraft as they towed it into the hangar, meaning I came out of the plane to accept the keys, instead of the other way around. After all of that, we had a nice lunch at a lovely spot beside the lake, and then we got on with packing the aircraft toward being ready to start the ferry flight later this week. All in all, a great day – the aircraft is performing flawlessly, and it looks wonderful.”

For our part, we’ve only got one question for the Internode founder: Will the plane have in-flight Internet access?

Hackett’s posts on his journey (complete with photography) can be found here:

And here’s a gallery shots from Hackett of what his PC-12 looks like (note the geeky ‘TCP’ number on the back):