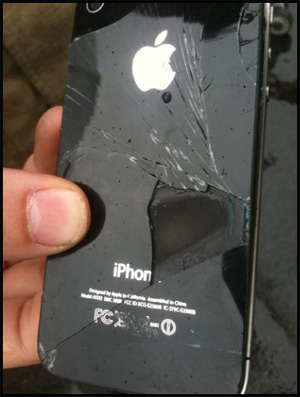 news Regional Express (Rex), Australia’s largest independent regional airline yesterday revealed that a passenger’s iPhone had self-combusted on board its flight ZL319 from Lismore to Sydney on November 25th. After landing, the phone began giving out a significant amount of dense smoke, along with a red glow.

Fortunately, the incident did not cause any harm to passengers or crew. A flight attendant immediately followed standard safety procedures to put out the red glow successfully. A report on the matter has been sent to the Australian Transport Safety Bureau (ATSB) and the Civil Aviation Safety Authority (CASA) for investigation and guidance. The mobile phone is likely an iPhone 4 or 4S and has been sent for analysis to the ATSB. The iPhone, like most mobile phones, uses a lithium-ion (Li-ion) battery.

Li-ion batteries have caused some safety concerns, being unstable at high temperature. The anode of a Li-ion battery gives out heat while the cathode might generate oxygen, which increases the explosion risk. If overcharged or overheated, the battery may undergo thermal runaway and the cell could rupture. In severe cases, this can result in combustion or explosion. Several types of lithium-ion cells cannot be safely charged below freezing point (0°C).

Deep discharge also can short-circuit the cell, making recharging unsafe. With short-circuiting, the overheated battery can catch fire, heating up adjoining cells and causing them to fail. The resultant ignition releases dense smoke.

Li-ion batteries are designed to counter these risks with fail-safe circuitry to shut down the battery if its voltage goes out of the safe range of 3 to 4.2V per cell. Other safety devices in each cell include a shutdown separator for high temperature, a vent for pressure relief, thermal interrupt for overcharging or excess current, and a tear-away tab for internal pressure. However, contaminants inside the cell can overcome these safety features.

Since January 2008, the US Department of Transportation has banned loose lithium batteries being carried in checked baggage, although they may be accepted if installed in a device. Spare batteries can be packed in carry-on luggage, making it easier for flight crew to monitor safety and deal with incidents such as happened on Rex.