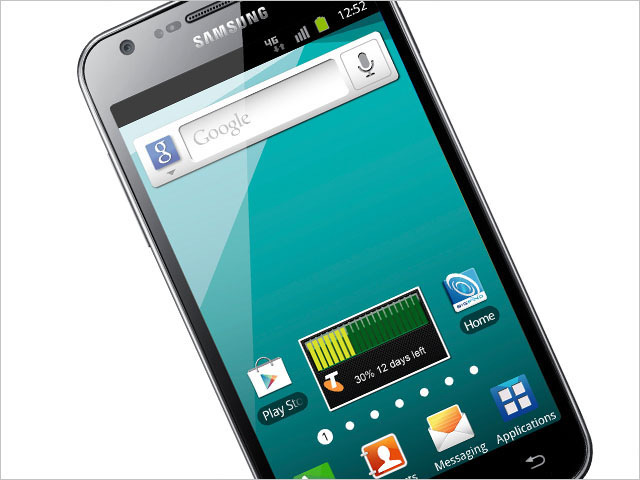 The phone represents the second smartphone to launch on Telstra’s fledgling 4G network (after the HTC Velocity 4G in January), which so far mainly covers the central business districts of major cities, but is gradually expanding outwards. The telco’s current 3G network that is based on the HSPA+ standard has download speeds varying between 1.1Mbps and 20Mbps, whereas the 4G band will enable speeds between 2Mbps and 40 Mbps. Upload speeds that are currently between 500kbps to 3Mbps will expand to between 1Mbps and 10Mbps.

In a media release issued today, Telstra director of mobile, Andrew Volard said Australians would live the speeds available through the company’s 4G network. “The Samsung Galaxy SII 4G takes the design elements that have made Samsung Galaxy SII one of Australia’s most popular smartphones and adds 2012’s must-have phone feature – ultra-fast 4G web connectivity. Customers in 4G coverage areas are going to love being able to load web pages up to five times faster than on 3G handsets. They’ll be able to send, stream and surf at speeds that will blow them away,” Volard said.

The 4G version of the Galaxy S II is not precisely the same as the original Galaxy S II (see Delimiter’s review here), which was Samsung’s top model in 2011 and was on sale through virtually every major mobile telco in Australia. For example, the Samsung Galaxy S II (4G) has a faster CPU, at 1.5GHz compared with 1.2GHz (although it’s still dual-core) and a slightly larger screen (4.5″ compared with 4.3″). These features, with the addition of 4G capability, no doubt bulks out the handset’s weight (at 132g compared with 116g), and it’s slightly thicker as well, at 10mm compared with 8.5mm. In addition, it has a 1850mAh batter, compared with the original’s 1650mAh.

The original Galaxy S II which shipped in Australia did not contain an NFC chip for mobile payments, but the new Telstra 4G version does. It also supports HD voice support on Telstra’s network for very clear calls, and HSPA+ dual-channel support for the fastest speeds possible when outside Telstra’s 4G footprint.

However, with respect to a variety of other specifications the phone remains similar. It doesn’t yet run the latest version of Google’s Android platform (Ice Cream Sandwich), although Telstra notes that it will be upgradable to this version in future. It features an eight megapixel camera capable of recording 1080p video, and a 2 megapixel camera on the front for video calling, 16GB of storage space and an 800×480 Super AMOLED Plus touchscreen.

The Samsung Galaxy SII 4G can be purchased online from today or from Telstra Stores around Australia from tomorrow. Telstra said in its statement that customers can purchase the handset for $5 per month on the $59 Freedom Connect Plan (after using an included MRO Bonus), with $550 worth of included calls & MMS, unlimited SMS and 1.5GB of data, all to standard Australian numbers (excludes use overseas) each month.

Business customers can purchase the Samsung Galaxy S II 4G on Telstra’s $70 Business Mobile Advantage Plan plus $5 per month Mobile Repayment Option for 24 months, after using their MRO bonus. This offer includes unlimited standard national SMS, free national voice calls to eligible mobiles on the same account in Australia and 1GB of data to use in Australia each month that can be shared with other eligible mobiles on the same account. The Samsung Galaxy S II 4G is also available to purchase outright for $768 RRP.

opinion/analysis
Wow, what a smartphone. The Samsung Galaxy S II was already one of the best smartphones on the market, and Samsung has now updated it with upgraded specs, NFC and support for 4G. I don’t know what else Samsung, Apple and other vendors have coming this year, but this is already looking like a clear leader at this point — at least for the next six months. Throw in Ice Cream Sandwich and I’m sold. This is what Delimiter reviewer Jenneth Orantia wrote about the original Galaxy S II last year, and it looks like it has just gotten even better:

“The Galaxy S was designed to take on the iPhone 4, and despite its warts (sluggish performance, short battery life), it was one of the first real challengers to the Apple empire. We’re guessing that Samsung had the impending iPhone 5 in mind when it built the Galaxy S II, but this has failed to materialise so far, making the Galaxy S II, with its dual-core processor, 4.3in Super AMOLED Plus display and 8-megapixel camera, the most powerful and feature-rich smartphone on the market.

There are other smartphones out there with similar specs, but none of them pull it off as well as the Galaxy S II. Whether Apple actually releases a new iPhone this year remains a question, but if you’re looking to upgrade your current handset now, you can’t do any better than the Galaxy S II.”