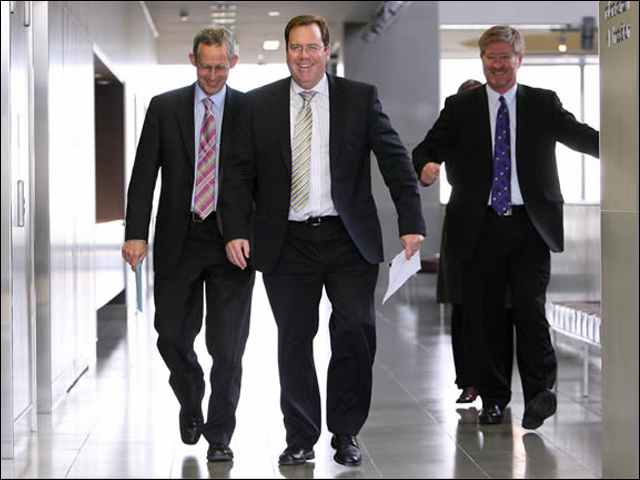 news The Federal Government has proposed to modify federal regulations to make it easier for anti-piracy organisations to request details of alleged Internet pirates from ISPs, in a modified process which would make it easier for organisations such as Movie Rights Group and AFACT to pursue individuals allegedly illegally downloading content online.

The details of the proposal are contained in a discussion paper released by Federal Attorney-General Robert McClelland this morning (PDF). The paper primarily discusses a change to legislation that would widen so-called Safe Harbour rules protecting organisations such as ISPs from the actions of their users.

However, a second section deals with what the Department of the Attorney-General described as “streamlining” the process whereby content owners could seek ISP subscriber details in copyright infringement matters.

“Widespread unauthorised downloading and use of file-sharing applications has made it increasingly difficult for copyright owners to successfully commercialise their property in the digital environment,” the paper states. “The difficulty of identifying persons engaged in infringing activities has also made it very difficult for copyright owners to protect and enforce their rights.”

The paper acknowledged Federal Court rules currently contained a general discovery procedure which could enable a copyright holder to obtain the details of a potential infringer from an ISP. This is the process which a new company, Movie Rights Group, has proposed in its current action to seek the details of some 9,000 Australians it alleges have illegally downloaded the film Kill the Irishman.
Movie Rights Group is also planning to target other alleged infringers over other films.

However, the paper stated, the process had been criticised as “cumbersome and expensive in the case of multiple online infringers”.

“There may be advantages in considering whether it is desirable to adopt a more streamlined procedure for copyright owners to identify ISP subscribers who engage in online copyright infringement,” it added.

The paper noted that any “streamlined” process would require judicial oversight, as well as taking into account the legal obligations of ISPs under both the Privacy Act and the Telecommunications Act — with a Federal Court Judge or Magistrate being required to issue an order authorising an ISP to provide details of a particular subscriber to a copyright owner — once sufficient detail had been provided (an IP address, the copyrighted material, the dates the alleged downloading had occurred and so on).

Cases in the US have shown that, once those details have been obtained, the copyright owner will often issue a letter to the alleged infringers, requesting they settle the copyright owner’s legal claim on the matter, or face legal action. It is believed that this is the approach which Movie Rights Group will take in Australia.

Attorney-General Robert McClelland revealed the discussion paper in a speech this morning to the Copyright Symposium, an event held by the Australian Copyright Council, an organisation which counts among its members Australian publishers across multiple categories — books, newspapers, film, music and more.

The full text of McClelland’s speech is available online. In it, the Attorney-General stated that “one of the most significant challenges” for copyright industries was “illegal file sharing and downloading”. McClelland highlighted two recent reports published by the Australian Federation Against Copyright Theft, and the newly formed Australian Content Industry Group, to illustrate the issue.

The politician also referred to the recent closed door talks between the ISP industry and the content industry over the issue. “This preliminary discussion was very successful with industry bringing many innovative ideas to the table,” said McClelland. “The Government intends to continue this discussion with key copyright and internet service provider stakeholders to further build on the progress that has been made.”

“I note that an agreement was recently reached in the United States between creative industries and internet service providers, whereby internet service providers will send out notices to users who are found to be distributing infringing material online. I am optimistic that collaborative approaches to online copyright infringement can also be implemented in Australia.”

“As the Greek Philosopher Heraclitus said, “Nothing endures but change.” The ongoing success of Australia’s copyright industries depends upon our ability to adapt to change and strike the appropriate balance between providing incentives for creators and opportunities for the market.”

Image credit: Office of the Attorney-General