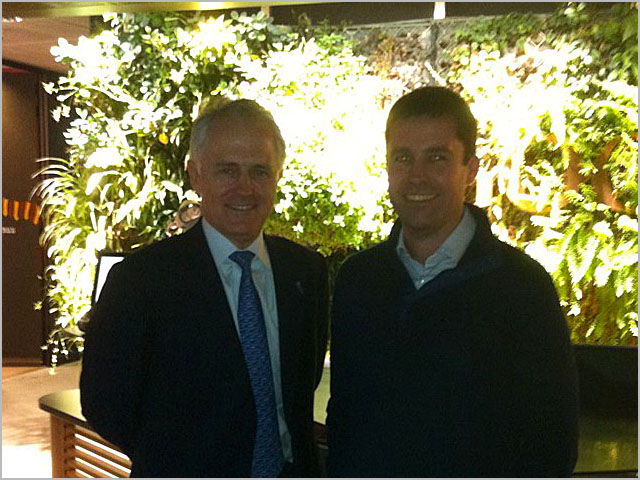 blog In the photo above (please forgive the poor quality), we have what I will describe as Exhibit A. This is a photo posted on Shadow Communications Minister Malcolm Turnbull’s Twitter account on 5 August — just one month ago. The location is Google’s Sydney headquarters in Pyrmont, and the man standing next to Turnbull is Google Australia chief Nick Leeder.

Now let’s turn to Exhibit B, an article published by ZDNet.com.au yesterday. In the article, Turnbull states that certain companies are in a “conspiracy against the taxpayer” because they were supporting the NBN, because it would benefit their business and they wouldn’t have to pay for it to be built themselves. And who are these conspirators? According to Turnbull, network vendors hoping to sell kit to the NBN, and:

“There are the over-the-top people like Google and Yahoo and media companies … The reason why there is an enthusiasm from a lot of sectors is that they think it is not their money.”

Now, there is probably no doubt that the NBN will benefit Google, and it makes sense for the company to support Government investment in the telecommunications sector, if it will ultimately boost Australian Internet adoption and use. Google has consistently backed the NBN, and there’s nothing really nefarious there.

Howeve, our question is … to what extent were Turnbull’s comments yesterday about Google stimulated by the meeting he had at the search giant’s Sydney headquarters in early August? Did Google acknowledge to Turnbull that they supported the NBN in public because of the selfish commercial reasons he mentioned, instead of the broader productivity and innovation benefits which it and many other players usually ascribe to the NBN?

And a second question might be: Following his comments yesterday, will Turnbull be welcome back at the Sydney Googleplex? Or will Google’s long memory bedevil any future relationship the Liberal MP tries to have with the search giant?