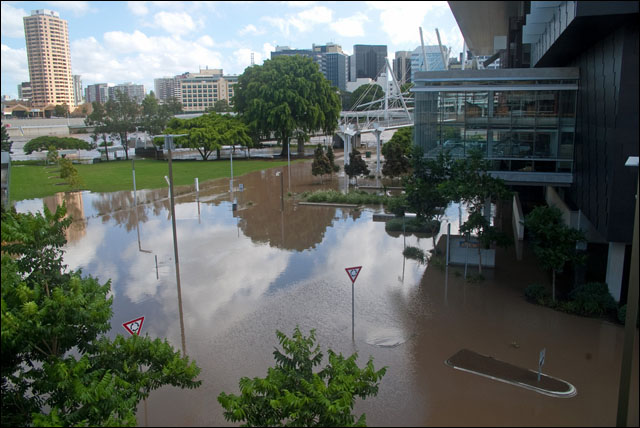 Telecommunication companies are currently struggling to restore their services in flooded Queensland territory, as access to damaged exchange sites is still denied and power outages prevent networks from operating.

Back-up power generators, portable exchanges, cells on wheels and even an “army” of Telstra employees are all waiting for waters to recede in order to be deployed and restore services; while thousands of citizens are waiting for communication to be re-established.

Electricity provider Energex has estimated more than a hundred thousand customers have been affected by outages, spread across the Brisbane Valley, Lockyer Valley, Caboolture, Gold Coast, Sunshine Coast, Logan, Fassifern Valley and Ipswich. Outages are believed to be due in part to damage and in part to the provider’s choice to disconnect areas at risk.

Telstra
Telstra maintains power and access to its damaged infrastructures are vital to restore its services. As of this afternoon, the telco has not managed yet to get to most of its affected exchange sites and needs to wait for waters to recede.

A document leaked this morning shows the telco has been unable to reach some 260 of its exchange sites due to flood waters. Furthermore — according to Telstra’s official updated report today — new sites in the greater Brisbane and Ipswich areas had lost power either from damage or from the power company disconnecting the areas for safety reasons; access to those sites is still denied.

“We have portable exchanges and Cells on Wheels, which are transportable mobile base stations, that we will use where possible to have services up and running quicker,” Telstra said in its statement.

However, the telco said power had been restored to some regional areas overnight and, as waters recede, efforts will be concentrated on repairs in the Brisbane Valley, Lockyer Valley, Ipswich and Gympie/Pomona areas, where mobile towers have been affected. One of the Cells on Wheels will be allocated to the Lockyer Valley, as soon as access becomes possible.

Furthermore, exchanges around Brisbane — Charlotte, Edison and Woolloongabba — have been manned to re-establish communication for emergency services. According to the telco’s bulletin, some extra staff, 130 Telstra employees, are ready to be sent where needed to help local teams, whenever waters permit.

“We are experiencing fault volumes at four times their normal level, so there will be delays in restoring services and we ask our customers to be patient during this time,” the company said.

Optus
Optus issued an update of its situation as of 11am today, stating limited impacts had occurred to affect its mobile and fixed networks; allowing the telco to continue to deliver services to the majority of Queensland and Northern New South Wales flooded areas.

However, power outages have had an impact on Optus’ services in five main areas: South Brisbane and the CBD, Toowoomba, Lockyer Valley, Ipswich and Kilcoy. The telco has been working to develop backup generators in accessible locations to face the outages.

In Brisbane a power loss disrupted the functioning of both Optus mobile and fixed network infrastructure. Optus’ CBD transmission facility has been affected, resulting in the loss of some 2G and 3G mobile services. Priority has been given for voice calls and SMS.

“Optus engineers continue to closely monitor the network in Queensland to minimise any impact on our customers,” the company said in a statement. “Our priority is to keep services up and running in the Lockyer Valley area as much as possible to assist rescue efforts”.

Optus reports Lockyer Valley is a critical area, as a loss of power at Mt Stradbroke forced all the mobile sites of the Valley to rely on power generators, thus making network coverage intermittent. The telco says it’s investigating the possibility of providig additional mobile coverage in the area.

Kilcoy is facing a similar situation, with the three Optus mobile sites having gone down; in Toowoomba mobile coverage is available partially; in Ipswich the telco estimates 7000 residential consumers can’t access home phone and internet services; and one of Optus’ Sydney to Brisbane links has experienced an optical fibre break, detouring services to the telco’s coastal link.

iiNet
In a media release issued yesterday, iiNet warned some of its broadband and telephone services were at risk. As staff from an iiNet datacentre in Brisbane had been required to evacuate, flood waters were expected to jeopardise iiNet services in Queensland.

iiNet CEO Michael Malone said there was about a 20 percent chance that flooding would force the company to shut down its Brisbane centre. “Fortunately we should receive enough warning to close down systems cleanly and notify customers in advance. We are keeping a close eye on the situation and will ensure customers are kept updated,” said Malone.

He said two out of four links between Sydney and Brisbane had been disconnected in the area of Toowoomba, while an additional one had been established. “Queensland customers may also notice periods of call and data congestion and we thank our customers for their continued patience as we prioritise emergency calls,” Malone said.

Earlier this week, iiNet launched a fundraising effort to respond to the Queensland Premier’s Flood Relief Appeal, and has planned to extend payment periods for its flood-affected customers. Further discounts and cancellations without penalty are available for customers who can’t return to their homes, due to severe damage.

VHA (Vodafone and 3)
Vodafone Hutchison Australia (VHA), which operates the Vodafone and 3 mobile brands, has rescued its mobile services in and around the area of Toowomba at about 1.30pm today, after a severe flooding impacted sites in the area since Monday.

In a media release issued this afternoon, Vodafone said there are now less then a dozen of its base stations impacted by the floods. Although 3G data services have been temporarily disrupted across parts of the 3 Mobile Network in Queensland, voice services for 3 customers have remained fully operational.

“Vodafone is working to restore full mobile phone services as soon as possible,” the release stated.

VHA said its engineers had been battling to keep Vodafone and 3 mobile services operating throughout the state of Queensland since the beginning of the flooding. The telco said helicopters had been deployed to deliver back-up power generators and diesel fuel to areas which have experienced power outages. Sandbag barriers and submersible pumps have also been used in areas currently at risk from flooding.

More as it comes.