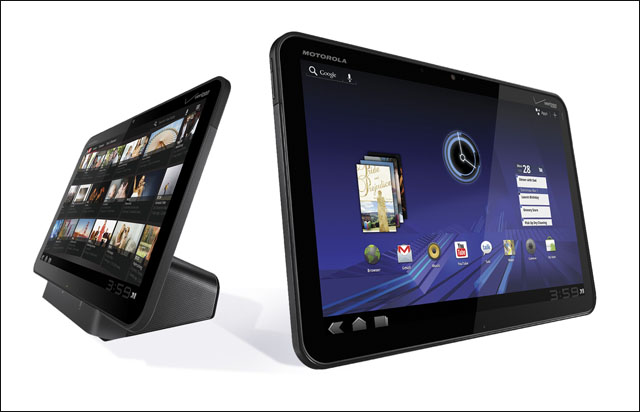 analysis The eyes of many of the world’s early technology adopters have been glued to their screens for the past week as almost every consumer technology vendor of size (Apple being a notable exception) has announced ground-breaking new products at the Consumer Electronics Show in Las Vegas.

This year, companies at the event have focused heavily on two categories of products; next-generation smartphones and tablet devices designed to mimic the success of Apple’s iPad, with both new types of handheld devices being predominantly based on Google’s Android mobile platform.

The only problem for Australian consumers is knowing which ones will actually come down under — and which will remain just a twinkle in a US or Asian executive’s eye.

Companies like HTC, Samsung, LG, ASUS, Acer, Sony Ericsson, Lenovo and Dell have all announced new products at CES; but so far none of the companies have confirmed plans to launch their new products in Australia. When Delimiter contacted the local representatives of the multinational technology giants this week asking for any local pricing or launch details, the almost universal response was: “It’s too early to know”, with local plans not yet having been finalised.

However, based on the specifications of the products concerned, and the current composition of the Australian market, it’s possible to make a few guesses. Take this article as it is intended; not as gospel, but as informed speculation about what Android-based mobile phones and tablets will hit Australia in 2011 that were displayed at CES.

US networks
The first thing that an informed observer needs to understand about this week’s wave of Android announcements coming out of CES is the constitution of the various mobile phone networks in the US. The reason for this is that — unlike the Australian mobile market — US telephone networks differ radically in the technologies that they use to deliver wireless services. If you buy a device suited for Sprint, for example, there is absolutely no guarantee that it will work on AT&T’s network — and a high likelihood that it won’t.

And most of the major Android smartphone and tablet launches to take place this week at CES have focused around one or more of those networks, as the various manufacturers partner with one telco or another to gain the advantages of distribution and marketing support for their devices.

Out of the four major US mobile telephone companies, only two — AT&T and T-Mobile — operate on standards broadly compatible with Australian networks. Sprint uses the WiMAX standard (which is broadly not used in Australia), as well as the EV-DO/CDMA standard which Telstra has canned. Likewise, Verizon also uses CDMA, although, like all of Australia’s mobile networks, it is gradually moving to the Long-Term Evolution Standard.

Although the various US telcos’ networks differ widely in the standards that they are using, they are all currently engaged in a marketing push to brand those networks as ‘4G’ for fourth generation — although in many cases Australia’s ‘3G’ networks are not far behind them, or in some cases (hello, Telstra) are in front with our ‘3G’ HSPA networks.

If a mobile device launches on the Sprint or Verizon networks in the US, it doesn’t mean it will be incompatible with Australian networks. However, it means it may be less likely to be compatible, and it may suffer a delayed local launch due to the need to modify the in-built wireless chip. Of course, there are very sparse technical details currently available about which types of networks the devices we’ll detail below do support. As we warned above, this article constitutes speculation.

Tablets
Perhaps the highest-profile tablets launch in the burgeoning tablet category at CES was Motorola’s Xoom tablet (pictured, above), as it is the first known device to use version 3.0 of Google’s Android platform — also known as ‘Honeycomb’. Honeycomb is being specifically designed for tablets, as opposed to the previous versions of Android, which were mainly designed for smartphones.

Like many of the upcoming wave of tablets and smartphones, the Xoom features NVIDIA’s dual-core Tegra 2 CPU, and a plethora of other next-generation features such as 720p video recording, a 1280×800 resolution screen and 802.11n capability. The bad news, however, is that the tablet is headed to Verizon’s CDMA/LTE network early this year, with ‘4G’ connectivity coming in the second quarter, meaning its network support in Australia on current specifications may be difficult to predict.

Australian businesspeople will also no doubt be disappointed to know that Research in Motion’s highly anticipated PlayBook tablet will be launching on Sprint and will presumably support the WiMAX standard. 3G versions of the devices are believed to be in the pipeline; but it appears likely that there will be a number of high-profile Android tablets launch in the Australian market before the BlackBerry maker can get its product into local hands.

With this bad news out of the way, however, there is a lot for Australians to be optimistic about with the wider range of Android-based tablets on show at CES this year.
Dell launched a 7″ version of its Streak tablet at the show, a device which the company has already confirmed will be on sale “globally” and will be upgradable to Honeycomb. With Optus selling the initial 5″ Streak in Australia, there is a likelihood the tablet will hit local shores sooner rather than later. And a 10″ model is also on the way. The Dell Streak 7 will launch on T-Mobile in the US.

Samsung’s 3G-enabled Galaxy Tab was criticised for its $1,000 price tag when it launched in Australia late last year, despite the device being a worthy competitor to the Apple iPad, but we can’t see any reason why the company won’t discount its new Wi-Fi-only Galaxy Tab if and when it hits local shores eventually.

The above products are probably best described as the ‘hero’ products in the tablet category, which are very hotly anticipated. However, a range of other manufacturers — Lenovo, ASUS, LG, Acer, Sharp, Fujitsu and Panasonic all demonstrated tablets at CES. Odds are that at least a couple of these companies will launch tablets in Australia in the next year.

In addition, we wouldn’t be surprised to see both Telstra and Optus — but probably not VHA — continue to launch Android-based tablets in Australia that have been manufactured in Asia. So far Telstra has partnered with Huawei on a Telstra-branded tablet, and Optus with ZTE. But both devices have been relatively low-end, a far cry from the T-Mobile branded tablet announced this week, manufactured by LG and to run Honeycomb.

Phones
Perhaps the best news for smartphone hounds coming out of CES this year is that AT&T — whose network is not dissimilar from that of Telstra, is planning to launch a stack of new high-end Android phones over the next year — including models from manufacturers like HTC, Samsung and Motorola.

The newest high-end Android phone in Australia is HTC’s Desire HD, an update to its popular Desire model which launched late last year on VHA. However, Samsung now looks to have a strong competitor to the Desire HD with its Infuse 4G (pictured, right), which features a 4.5″ Super AMOLED Plus screen and a 1.2Ghz CPU.

Not to be outdone, HTC also launched several new phones with AT&T — the Freestyle and the Inspire. However, we’re betting neither will come to Australia, as the Inspire appears similar to the Desire HD, and the Freestyle is a mid-range device similar in some ways to HTC’s existing Legend, selling on VHA.

Motorola has so far lacked a really high-end Android phone in the Australian market, so we wouldn’t be surprised to see the company’s new Atrix 4G, which will hit AT&T and Orange in the UK, come to Australia this year. With a dual-core CPI, 1GB of RAM, a 960×540 display resolution and a number of peripherals that extend its functionality dramatically, this would be an ideal competitor to the HTC Desire HD and Samsung Infuse 4G in Australia.

Motorola has tended to focus on partnering with Optus in Australia, so we wouldn’t be surprised to see an Atrix launch through the SingTel subsidiary.

There’s no doubt that Sony Ericsson’s Xperia X10 — while it was received positively in Australia — is due for an update, and the Xperia Arc announced at CES would fit that bill perfectly. With a striking concave form factor, a 1GHz CPU and a screen size of about 4.2″, the device will be available “globally in selected markets” — and, we’re betting Australia will eventually be on that list.

Like Motorola, LG has lacked a really high-end Android phone in Australia. This gap could be filled by the Optimus Black — a phone with an innovative new type of ‘NOVA’ display and a nicely sized screen. Details are sparse, but so far the Optimus Black looks to be one of the most interesting handsets to come out of LG in the past while.

Of course, there were a plethora of other handsets launched at CES. Motorola launched the Cliq 2 on T-Mobile and the Droid Bionic on Verizon, and Verizon also picked up the HTC Thunderbolt and the LG Revolution. But the phones above are the ones we’re most interested in, and at the moment, the most likely to come to the Australian market, in our book.

It’s not likely that Australians will get a really good peek at our smartphone and tablet line-up in-country until the Mobile World Congress conference kicks off in mid-February at Barcelona. The event last year was the scene for the local launch of a number of flagship phones — such as the HTC Desire on Telstra, which heralded a tipping point for the adoption of the Android platform in Australia. But so far the analysis from CES looks good — 2011 should be an amazing year for smartphones and tablets down under.

What tablet or smartphone devices launched at CES are you looking forward to seeing in Australia?