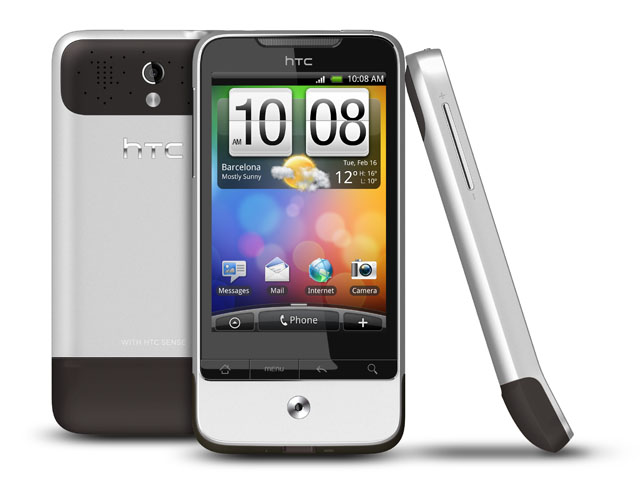 Design
The HTC Legend is compact and sturdy with a good bit of funk thrown in. The overall handset design fits in with the HTC handset camp and with 11.5mm x 56.3mm x 115mm dimensions it is slimmer and narrower than the HTC Desire.

Interesting contrast of the 3.2 inch AMOLED HVGA display’s black border against the brushed aluminium casing, and the casing looks great in the light. It feels cool to the touch and fits snug in the hand. However, with the combination of the 126 gram and slick finish it felt like it would pop out of my hand at any minute when I first started using it.

The buttons are discreet and flat so they don’t break the flow of the design or stick out so they activate at the slightest bump. It took me a minute to find the camera button and I found it encircling the light wheel below the navigation buttons, very unobtrusive.

The light wheel (optical tracker) was responsive but I didn’t have the need to use it often, although I would rather use a light wheel than a physical ball for navigation.

The battery pack and sim card slot was at the back lower section of the handset and it was the easiest access to battery and SIM card I have ever used on a phone. The outer casing did pop a couple of times at a few heavy bumps but the inner casing held everything in place.

Overall the design isn’t as good-looking as some phones currently on the market but the aluminium casing and slim design gives it an edge over the other handsets in the price bracket.

Features
The most exciting feature of the Legend is the Android 2.1 (Éclair) operating system and the user interface is HTC’s own HTC Sense (which runs on top of Android 2.1).

Interface features include the fact that the home screen has a drag and drop application shortcut functionality, with 5 screen spans available by swiping left or right and Leap. Leap is a shortcut to navigate to a home screen — the process of pinching two fingers together on the screen to bring all the home screens together.

CPU processing speed is 600Mhz with 384MB RAM and internal storage of 512 MB with an expandable memory of up to 32GB. The Legend has a phone message application that is represented in a scrollable timeline and supports Microsoft exchange mail application service.

Friend Stream is HTC’s social media application. It takes up a whole screen space and pulls in all commonly used social communication application feeds into one stream. Friend Stream takes into account messaging, phone calls and media captured with the phone and by logging into accounts such as Twitter, Facebook and Flickr — it will add their activity to the timeline. The Friend Stream timeline can be isolated by choosing one of 4 icons on the lower portion of the display — All stream, Status Updates, Photos and Links.

All of the time-lines are represented as text blocks with an avatar that has an application icon superimpose to represent what social app it comes from. The Photos timeline which is represented as a mini gallery for each new photo set. Additional features include Flash lite v4, multi-touch a 5 megapixel camera with flash, FM Radio and a 3.5mm standard stereo audio jack.

Performance
The phone connected with Microsoft exchange mail server with no hassles. The display was a little hard to see in full sunlight but it did help a little to take off sunglasses and squint.

However I did try not using the Friend Stream and HTC Peep (NB I didn’t delete them from the handset), and replaced Peep with Seismic and didn’t log into Facebook at all.

When this was done I came across “The process .com.htc.bg has stopped unexpectedly. Please try again.” error umpteen times and I had to choose force quit — although this didn’t cause any programs running to shut down. This error had come up once after re-syncing accounts with Friend Stream.

Looking into the error online, some believe it has to do with HTC Facebook syncing and that there were two fixes that worked — one was to remove any apostrophes from a Facebook user name and another was to download a different Facebook application from the market.

The camera and video capturing worked well in daylight and well-lit night-time sporting events, although the flash washed all the colour out if used in darker environments. The camera also has post editing filter options but users are better off using Photoshop, an online service or downloading an Android application to do any post work.

Audio pick-up on the video capture was good quality and didn’t blow out during levels of high decibels and playback sounded good without distortion — it was tested at State Of Origin Game 2.

The battery life lasted a good day and a half using gmail, tweeter, alerts, taking photos, the odd browsing and making phone calls.

Summary
The HTC Legend is smaller and less powerful than the HTC Desire but the handset surpassed my expectations. It is a great little phone in it’s own right. Great sturdy hardware design outside, hardware inside packs a punch for a small package. The HTC Sense interface is quite good and slick once you’ve fixed any nagging crashes.

The Android 2.1 OS is a playground for advanced users and the HTC Sense interface is intuitive and inviting for those who just want to use a smart phone.

HTC Legend is available from Vodafone and Vodafone dealers with Cap plans at $29; $49; $69 a month and Unlimited Cap plans at $99; $119, all plans are 24 months. The Legend can be purchased outright for a RRP of $599. Launch dates for 3 mobile are to be announced at a later date.