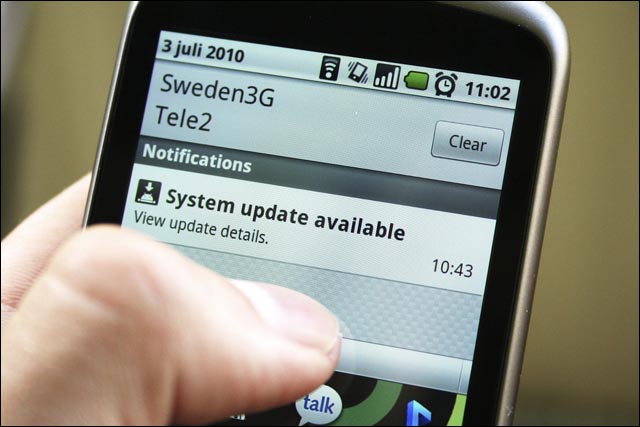 When will the new 2.2 version (commonly called Froyo) of Google’s Android operating system hit Australian handsets? We contacted carriers and handset manufacturers to find out. The answer, it turns out, depends on what mobile phone you have.

When asked, Vodafone boasted that its over the air (OTA) Froyo update will be coming in July to the Google Nexus One handset it is exclusively selling down under.

“The Android 2.2 update will be available as an OTA update from Google — customers who buy the Nexus One exclusively from Vodafone will receive a message directly from Google on their device once the update is ready,” the company said in a statement. “Timings on the update are still to be confirmed, however are anticipated to be available within weeks of the launch day.”

HTC — which has several Android handsets in Australia, notably the HTC Desire and HTC Legend that are sold with the 2.1 firmware — said that the 2.2 OTA could be expected next quarter although a date was not confirmed.

“We are working hard with our partners to update the HTC Sense experience on Froyo and distribute it to our customers as fast as possible. We expect to release updates for several of our 2010 models including Desire and Legend in Q3,” the company said in a statement.

Sony Ericsson has a number of Android handsets in the Australian market — the Xperia X10 and the Xperia X10 Mini pro that both run Android 1.6. But the company was not ready to respond about Froyo, although it was quite ready to talk about updates to its own platform. “Unfortunately Sony Ericsson aren’t able to comment on Android 2.2 at this stage,” the company said.

An update for Xperia’s User eXperience platform (UXP) will be released in September and October/December. This will add the ability to do HD recording and also bring wireless connection capabilities with some users’ TVs (to view Sony Ericsson’s Mediascape and Timescape applications).

Representatives for Samsung — which recently launched its Galaxy S handset in Australia — evaded the topic, not responding to a request for comment on the issue. The 2.1-driven Samsung Galaxy S is exclusive to Optus and Virgin for its first month of sale.

Froyo was available for download since last week for those desperate for the OS firmware update but an OTA update is a more normal option for those not as keen or as savvy to upgrade manually.

The Froyo has significant updates to the OS which means greater control, loads of interface changes and the performance benchmarks are cranked.

There are more options in menus — for example the 2.1 settings menu had “sound and display”, whereas 2.2 has “sound” and “display”. Gmail updates include senders email address preview underneath the bold type of the senders name. Facebook email notifications will display the person of interest Facebook avatar in the email.