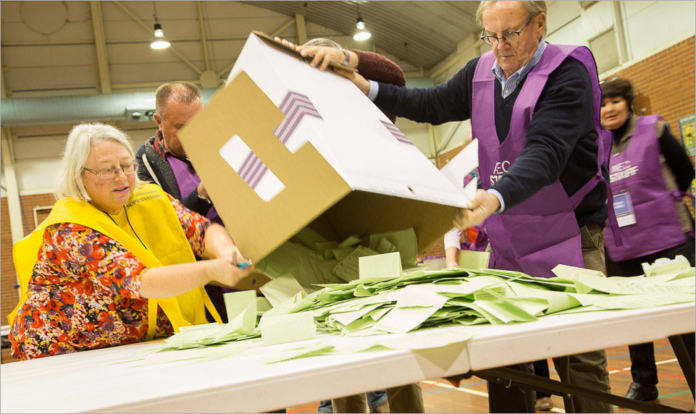 This article is by Robert Merkel, Director of UWA Centre for Software Practice, University of Western Australia. It originally appeared on The Conversation.

opinion/analysis Several advantages of online voting were identified in a recent post by Conversation columnist and software researcher David Glance who backed the introduction of such a scheme in Australia.

He is correct that an online voting system would be faster, more convenient and have fewer accidental informal votes. It would also reduce the donkey vote problem (though the “donkey vote” bias can also be dealt with by the use of Robson rotation on printed ballots).

But in my view he dismisses the very real risks not only of actual election tampering, but something equally important – the confidence that Australian elections aren’t being tampered with.

The right technologies, deployed in the right way, can assist with speeding up vote counts without putting the integrity of our voting system at risk. The place for that technology is not as a replacement for the paper ballot.

Most Australians conduct many financial transactions online, such as paying bills or online banking, with a reasonable degree of confidence.

But while these systems do work acceptably well most of the time, there is a steady stream of fraud committed against them. Some estimates put the cost of cybercrime in Australia at around A$2 billion annually.

Furthermore, there are some key differences between voting and financial transactions which will make electronic voting harder to secure.

For example, financial transactions are private, but not anonymous, and they are conducted on a continuous basis, not once every three years or so.

The two parties to a financial transaction can see how the transaction is interpreted by the financial institution involved, and can report any problems.

Any fraudulent financial transactions can often be reversed or compensated for on an individual basis. If an online election is found to be unsound, the only remedy may be to rerun the election.

Further concerns over online voting have been raised elsewhere on The Conversation.

Confidence in elections is social, not just technical

If we propose to radically change Australia’s vote-counting system, we should at least do so only after fully considering the nature of the existing system.

It’s pretty widely acknowledged that Australia’s vote counting system is generally accurate and not subject to widespread tampering. So let’s ask the question: why do we have confidence in Australian elections?

Partly, it’s by direct observation as voters: as we vote, we also observe the process. We see the ballots, we see them being placed in the ballot box. But it’s also through our network of relationships.

Many Australians would probably know one of the 75,000 temporary poll workers. Those more interested in politics are likely to know a scrutineer, a representative of a party on the ballot who directly observes the vote counting.

Confidence in Australian elections is therefore the result of the observations of a large fraction of the Australian population. The confidence that a conspiracy to rig a vote involving many ordinary Australians is beyond the realms of plausibility.

An online, or even an electronic voting system in polling booths, would shift the responsibility for electoral integrity to a tiny technical elite with the time and skills to audit the voting technology used.

We are supposed to trust both their personal incorruptibility, and their competence. Serious security flaws are often missed by such professionals until they have been systematically exploited by criminals.

Automate the count, not the recording

People with disabilities have been among the strongest advocates for electronically aided voting, for good reason. But that does not mean that paper ballots should be discarded to this end.

With the right technology, instructions expressed by voice commands, a touchscreen, or whatever interface the voter can use unaided can do the job of marking their ballots. That way voters with disabilities will be able to vote with the same level of privacy and autonomy that others take for granted.

Regardless of how they are marked, paper ballots do not necessarily need to be counted by hand. Senate ballot papers are currently being counted with the assistance of handwriting recognition systems similar to the ones used to read postcodes on hand-addressed envelopes.

The present system is only semi-automated, in that every ballot scan is then checked by a human operator.

In the future, it is likely that the system can be refined so as not to require every vote to be human-verified. For instance, using two or more independently implemented automated counting systems, combined with randomised spot checking by AEC staff and scrutineers, may be sufficient to ensure an accurate count.

This would allow much faster initial Senate counts but, if there is any doubt, a hand recount is always possible.

In the United States, which uses a wide variety of vote-counting technologies, the one most favoured by academic experts is optical scanning ballots. Many people would have come across these in multiple-choice tests such as driving tests: you fill in the box corresponding to your choice.

These work very well in the American context. They are fast, accurate and can be hand-counted in case of a technical problem or dispute. But American elections do not use the preferential voting system.

Designing a system and educating Australians to use this kind of ballot for preferential votes would present a significant challenge and would probably result in a high informal vote.

In any case, expert opinion is clear – no voting system that relies on electronics to record votes, including systems that produce some kind of human-readable audit trail, has any substantial advantages over paper and pencil (or, perhaps indelible pen).

Even the inventor of the “voter-verified paper audit trail”, Dr Rebecca Mercuri, has concluded that such systems are inferior to paper ballots marked by the voter.

By Robert Merkel, Lecturer in Software Engineering, Monash University This article was originally published on The Conversation. Read the original article.