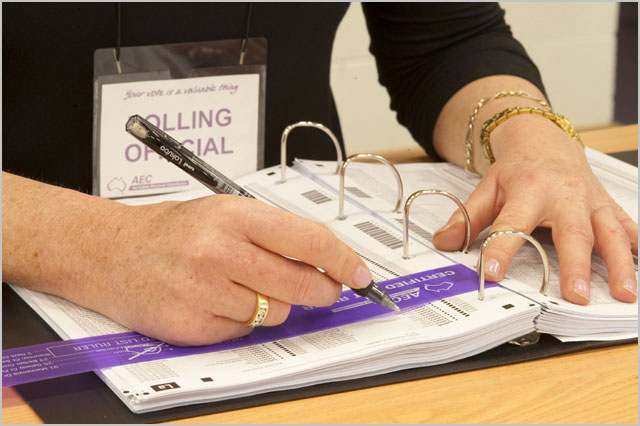 This article is by Jennifer Rayner, Doctoral Candidate, Australian Politics at the Australian National University. It originally appeared on The Conversation.

analysis The Australian Electoral Commission’s (AEC) loss of 1,375 ballot papers for the West Australian Senate count was an unfortunate failure from an agency that already faced growing public pressure to do away with paper and pencil voting.

Even before the ballots disappeared, newly minted MP Clive Palmer was loudly calling for the introduction of US-style electronic voting machines. Meanwhile, an experiment with internet voting for people with disabilities in New South Wales in 2011 caused many to question why we all can’t vote from home.

But before we pulp the paper ballots, it’s worth considering what — if anything — is actually wrong with the system as it stands, as well as what the pros and cons of the alternatives may be.

Australia’s current procedures for recording and counting votes have essentially remained unchanged since federation. Voters are given a piece of paper and a pencil with which to record their voting preference, and the completed ballot papers are then placed in a sealed box.

At the close of the polls, those boxes are opened and an initial count is conducted by hand on-site at each polling booth. The AEC employs thousands of returning officers to staff each booth and manage this initial count; these officers then phone the results into AEC headquarters so they can be plugged into the commission’s central database. That’s how we get the “provisional results” that are broadcast on election night.

After election day, the ballot papers from individual booths are transported to a central location in each state so that a second, more formal, count can be carried out. This involves entering the preferences for each individual ballot into a computer, so a definitive distribution of preferences can be calculated electronically.

There are a range of steps that could be taken to reduce these risks. To give just one example of an approach which was trialled in Belgium, ballot papers could be scanned on-site at polling booths using optical character recognition scanning. The electronic copy would then be transmitted to the central counting facility rather than the paper ballot.

Unfortunately, this would mean dispatching scanners to the 7,697-odd polling booths around Australia. Every booth would also need sufficient, secure and reliable internet connectivity to transmit the scanned documents back to AEC headquarters – making this option somewhat impractical.

Of course, in this tech-obsessed age there are many who would like to see a move towards either electronic or internet voting regardless of the real necessity for this. But these types of voting pose their own challenges and concerns. This may explain why only 11 countries use electronic voting for major state or national elections. And just one country — Estonia — has successfully implemented internet voting.

There are a range of different electronic voting machines on the market, each of which let voters push a button, pull a lever or tap a touch screen to register their voting choice. Votes are either recorded directly within the machine, or printed as a barcode which is then placed in a high-tech ballot box which “reads” and logs the vote data from the printed ballot.

While the act of voting itself might be more futuristic, the process for transferring the recorded votes from individual machines to a central database is usually anything but.

In some cases, the machines themselves must be physically transported so that they can be plugged into a central mainframe, while in other cases they download the vote data to a CD or USB so that this can be sent to the central counting facility.

So it’s not just a simple matter of hitting “upload” and having all the individual booth data materialise at the AEC’s headquarters. Either the counting machines themselves or a copy of the data must still be transferred, and this raises similar concerns about data being lost, damaged or interfered with.

What’s more, the technical nature of the machines means they can either break down, leading to long queues at polling booths, or develop bugs and glitches, which can affect the accurate recording of votes.

Internet voting avoids many of these problems, as voters can simply log on to a secure site and cast their vote. But there are two huge question marks hanging over this process: how do we ensure that the person casting the vote is actually who they say they are, and how do we ensure the site is not hacked or tampered with?

Estonia is the only country to have so far answered the first question. All Estonian citizens are issued with a national ID card which includes a smart chip recording their identity details. This has been used to verify voters for online voting at national elections since 2007.

Since the Australia Card was howled down in the 1980s, Australian governments have had no success in convincing us we should also carry national IDs. So it’s hard to see that approach catching on here – even if it did mean we could all vote without having to put on pants.

The issue of cyber security is more challenging, and experts suggest that the Estonian authorities have not comprehensively addressed this. Given recent revelations about the extent of international data snooping and penetration, is it really so hard to imagine an online group such as Anonymous choosing to disrupt the electoral process for kicks?

Or what about a foreign power manipulating the vote to ensure the party most sympathetic to their own interests gets elected? These are serious concerns, and until we have real solutions to them (or decide that we’re just willing to take the risk) internet voting isn’t likely to play a significant role in future national elections.

The loss of the West Australian ballots is a serious breach of electoral integrity, and one that must be thoroughly investigated to identify what went wrong. But amidst all the party-driven hysteria, it’s important to remember that no system is entirely fail-safe, and the risks posed by electronic or internet voting are potentially far more serious than this isolated incident.

Jennifer Rayner does not work for, consult to, own shares in or receive funding from any company or organisation that would benefit from this article, and has no relevant affiliations. This article was originally published at The Conversation. Read the original article. Image credit: Australian Electoral Commission.