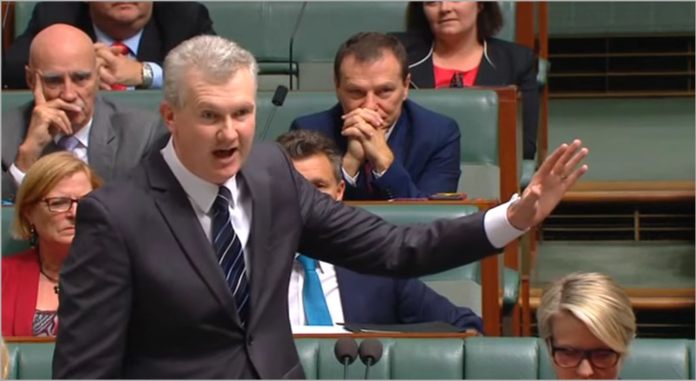 news The Opposition has reported filed a formal complaint with the Secretary of Malcolm Turnbull’s Department of the Prime Minister and Cabinet over what it said was a “clear breach” by the NBN company of the Caretaker Conventions which require it to remain impartial during the election period.

A week and a half ago, AFP officers raided the Melbourne office of former Communications Minister Stephen Conroy, and the house of at least one Labor staffer working for Shadow Communications Minister Jason Clare, in an apparent attempt to ascertain the identity of whistleblowers who have leaked a series of key documents from within the NBN company.

Yesterday NBN chair Ziggy Switkowski published an extraordinary article in the Sydney Morning Herald accusing the NBN leakers of being thieves and not whistleblowers, and strongly defending the NBN company’s record under the Coalition.

In response to Switkowski’s article, Shadow Finance Minister Tony Burke has written to Martin Parkinson, the Secretary of Malcolm Turnbull’s Department of Prime Minister and Cabinet.

Parkinson is the formal head of the Australian Public Service and responsible for arbitrating disputes over the Caretaker Conventions during the election campaign period.

The Caretaker Conventions are a set of rules which aim to ensure that the Government of the day does not gain an unfair advantage during an election campaign by using the resources of the APS in the campaign. They are available online here.

You can download a copy of the letter here in PDF format.

“In writing this opinion piece, Dr Switkowski has used his role as Chairman of NBN Co to run a contestable script to the specific advantage of the Prime Minister and the Liberal Party.”

“Dr Switkowski’s intervention is a clear breach of the Caretaker Conventions and the Commonwealth Government Business Enterprise Governance and Oversight Guidelines,” Burke states in his letter to Parkinson. “I ask that you immediately undertake inquiries in relation to this matter.”

The news represents only the most recent time that the NBN company has been in hot water with the Opposition over appearing to take a partisan position regarding NBN policy.

In Senate hearings early this month, the NBN company revealed plans to hold a product launch just days before the upcoming Federal Election on 2 July. At the time, former Communications Minister Stephen Conroy directly cautioned the NBN company to keep the Caretaker Conventions in mind during the election campaign.

In April, NBN chief executive Bill Morrow made an extraordinary intervention into the pre-election national political debate over the National Broadband Network, warning Labor that it would need “a good explanation” to change the NBN model imposed by the Coalition.

In March, NBN Co assisted Environment Minister Greg Hunt with an election campaign event in his electorate of Flinders, as well as supporting other Coalition MPs in a media release and an event in Woy Woy.

Under Labor, too, the NBN company has taken positions during an election campaign which could appear to be partisan.