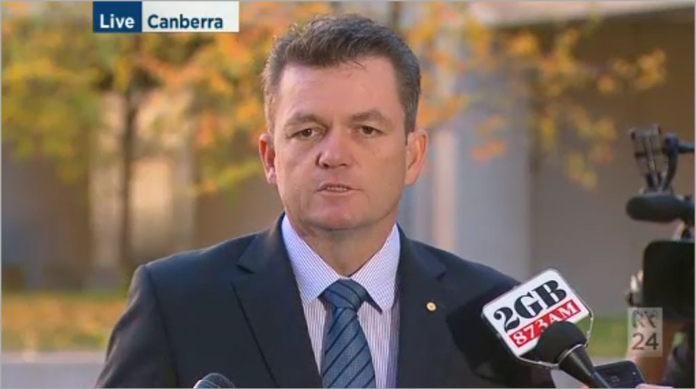 news The Australian Federal Police today said there had been zero political influence on the seven month investigation into damaging leaks from the NBN company which yesterday culminated in raids on Labor Party offices, with the Government itself only being told about the investigation yesterday.

In a nationally televised press conference in Canberra this morning, AFP Commissioner Andrew Colvin categorically ruled out any political influence on the NBN leaks investigation.

Colvin said the matter had been referred to the AFP by the NBN company in December last year, with the AFP having conducted an investigation since that time, culminating in yesterday’s raids, which weren’t concluded until the early hours of yesterday morning.

The AFP Commissioner said that the AFP always acts “independently” and “according to the law”.

“There has been no influence on the AFP in the conduct of this investigation,” he said.

Colvin said the Government became aware of the investigation shortly after the commencement of yesterday’s raids after the AFP informed it. Shortly afterwards, Colvin called Opposition Leader Bill Shorten to inform him of the raids, in a very brief conversation, and then Senator Conroy.

“We have acted independently from Government,” said Colvin.

The AFP Commissioner said the timing of the raids were not influenced by “external factors” such as the election campaign, but “by the progress of the investigation”. The AFP believes that the offending leaking behaviour was also being carried out during the conduct of the investigation over the past seven months.

This means that the documents have been sealed, and that the AFP has no access to the documents until Parliament itself can determine the legitimacy of the parliamentary privilege claim. As Parliament has been dissolved due to the Federal Election being called, this cannot be done until after Parliament returns following the Election.

The AFP Commissioner noted that a staff member from the NBN company was present at both sites of yesterday’s raids, providing a degree of expertise as to the authenticity and origin of the documents being seized. The NBN officer was listed on the search warrant as a “constable assisting” the investigation.

Colvin would not confirm whether journalists’ metadata has been accessed as part of the investigation.

There is no requirement to make journalists aware of their metadata having been accessed, under last year’s Data Retention legislation, although government-appointed public interest advocates would have the chance to argue privately against such access, if they chose.

The AFP Commissioner confirmed that Communications Minister Mitch Fifield was not aware of the investigation.

“This matter was given no more or less precedence or seriousness than any other matter,” he said.