Although the AFP has denied any political influence on the investigation, opposition Leader Bill Shorten subsequently blasted Malcolm Turnbull for what he said was the Prime Minister’s attempts to stop the public from knowing the “truth” about the National Broadband Network, which the Opposition Leader said had become a “national disgrace” under Turnbull’s watch.

In its own statement, the Media, Entertainment and Arts Alliance, which represents Australian journalists, said the raids showed how press freedom in Australia was “under attack” and ultimately needed to be an election issue. 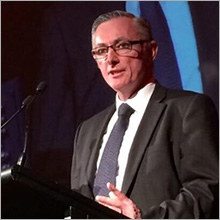 MEAA chief executive Paul Murphy (pictured) said the raids of the offices and home of a Labor staffer in Melbourne were “a disturbing new twist in pursuit of whistleblowers and legitimate public interest journalism”.

“The raids are a heavy-handed and over-the-top response to media stories which have embarrassed the government,” Murphy said. “Once again, the government wants to shoot the messenger rather than address the issues raised by journalists in their reporting.

“AFP Commissioner Andrew Colvin is correct that the AFP has acted lawfully, but we contend there is something wrong with the law when police search warrants can be used to pursue legitimate whistleblowers.”

Murphy said both major sides of political had voted to bring in invasive legislation which had “complete disregard for the public interest” and targeted whistleblowers and journalists. It appears Murphy was referring to last year’s Data Retention legislation.

“As Edward Snowden recently commented, specifically about the situation in Australia, ‘Sometimes the scandal is what the law allows’,” Murphy said.

Murphy said the AFP also needed to be open about whether journalists’ metadata has been accessed without their knowledge. AFP Commission Andrew Colvin this morning refused to comment on the issue.

“The access of journalists’ phone and internet records potentially puts them inadvertently in breach of the journalists’ code of ethics and the obligation to protect confidential sources,” Murphy said.

“The answers given by Commissioner Colvin to these questions today were completely unsatisfactory. We were told that it was necessary to pass the metadata retention laws for national security purposes, but I am sure most Australians would be appalled to learn that the metadata laws are being used in this way.”

Murphy said the current election campaign highlighted the role of journalism in exposing the policies and actions of all political parties to public scrutiny so people can make an informed decision at the ballot box.

“Australia was once a bastion of press freedom and freedom of expression but now governments are pursuing journalists and their sources, criminalising legitimate journalism in the public interest and denying the public’s right to know with pressure mounting to further deny information from becoming public,” Murphy said.

“There is a great deal of effort being expended by government to avoid legitimate scrutiny. And it’s getting worse. These attacks on press freedom undermine democracy.”

opinion/analysis
From my personal point of view as a journalist, I strongly agree with what Paul Murphy has said here.

It is simply absurd for journalists and Opposition MPs and their staff to be targeted by police for simply doing their job and holding the Government of the day to account for its actions. Democracy itself relies on the ability of Opposition parties and journalists to do their work.