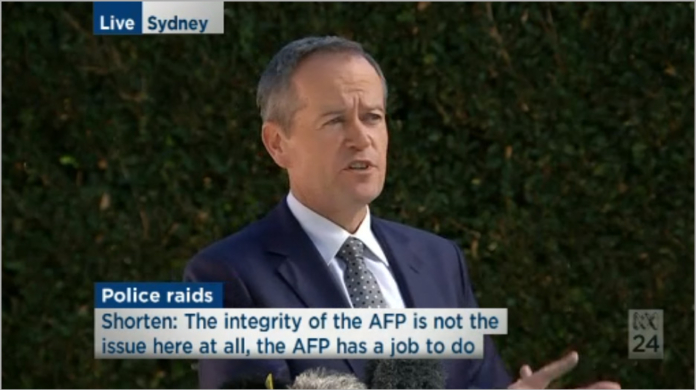 news An angry Bill Shorten has blasted Malcolm Turnbull for what he said was the Prime Minister’s attempts to stop the public from knowing the “truth” about the National Broadband Network, which the Opposition Leader said had become a “national disgrace” under Turnbull’s watch.

In a nationally televised press conference in Canberra this morning, AFP Commissioner Andrew Colvin categorically ruled out any political influence on the NBN leaks investigation, stating that the Government had only become aware of the investigation as the raids were commencing yesterday.

However, in his own press conference this afternoon, Shorten drew a direct link between Turnbull personally and the NBN company’s actions.

The Opposition Leader said it was “inconceivable” that the NBN company would have acted on its own on this matter, without the Government knowing about it.

Furthermore, Shorten noted that Turnbull had been Communications Minister for two years as part of the Abbott administration.

“I don’t think Australians are going to fall for the idea that the NBN lives on a different planet than Malcolm Turnbull — he was their Minister,” Shorten said.

The NBN company and the Government were not “two complete strangers who would pass each other on the road”, Shorten said. “It is inconceivable that NBN Co would launch a police investigation and not make its owners aware of what is going on.”

Shorten said Turnbull was going to “extraordinary” lengths to stop Australians from finding out the “truth” about cost blowouts in his version of the NBN.

“He is going after whistleblowers and he is smearing his political opponents,” said Shorten. “This is about an arm of Government seeking to shut down the truth.”

“Why is it that Malcolm Turnbull is so determined to stop the media from knowing the truth or the public finding out the truth?”

The Opposition Leader said the reality was that Turnbull was “embarassed” by the performance of the NBN over the past several years under his watch.

“Malcolm Turnbull has been in charge of Australia’s largest ever infrastructure project, and it’s been a disaster,” he said. “He promised a rollout of such ambition and scope, and it has never materialised.”

The documents which have been leaked from the NBN company over the past nine months have outlined a range of problems with the Coalition’s version of the NBN, including cost blow-outs, delays to the NBN rollout schedule, concerns about the quality of legacy networks the NBN company is acquiring from Telstra and Optus, and more. The NBN company has consistently questioned the authenticity of the leaked documents.

Shorten said it was clear that the NBN rollout had descended into an “unmitigated disaster” under Turnbull’s watch, and pointed out that the AFP had not investigated similar leaks regarding national security matters to come out of the Cabinet of the current Government.

“I think the public has the right to know the truth,” he said. “I think whistleblowers should have the capacity to do their work.”

“This country should be about the right of you, the media, to publish facts — for journalists to publish fearlessly.