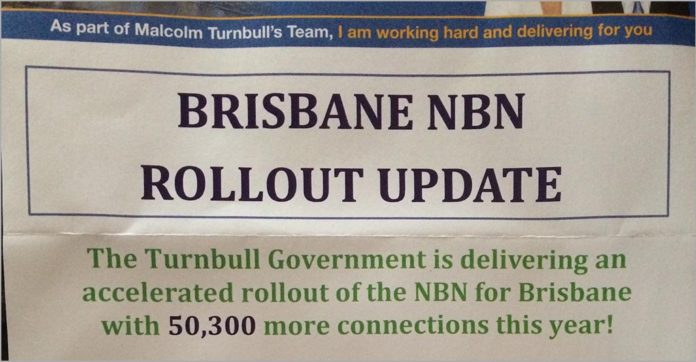 news The Coalition appears to have kicked off a campaign designed to discredit Labor’s management of the National Broadband Network project, with at least one Liberal MP relying on party-supplied material to claim that “$40 billion was wasted” during its early days.

The NBN project was initiated by the Rudd and Gillard Labor Governments from 2007, although the best-known Fibre to the Premises version of the network was not formalised as a concrete project until April 2009.

Since September 2013, the Abbott and Turnbull administrations have substantially shifted the model of the network, moving away from Labor’s FTTP model and incorporating the legacy copper and HFC cable networks owned by Telstra and Optus, in a so-called “Multi-Technology Mix” approach.

This week a resident in the Queensland electorate of Brisbane sent Delimiter a pamphlet which had been distributed in the area by local MP, the Liberal Party’s Teresa Gambara. You can download the pamphlet in JPG format here.

In the pamphlet, Gambaro substantially talked up the Coalition’s performance managing the NBN project, describing the initiative as a “game-changing initiative that will provide the basis for Australia’s economic transition”.

Under Labor, Gambaro stated, “barely 300,000 premises could be connected to the NBN after four and a half years”, and “$40 billion was wasted”.

In comparison, Gambaro said in the pamphlet, the Turnbull Government was currently connecting 15,000 premises per week; the amount of homes connected had just reached 1.7 million, and connections to a further 600 premises were currently being constructed, with a further 1.3 million undergoing design work.

Specifically in her electorate, Gambaro said, 11,726 premises had already been connected as part of what the Liberal MP described as “part of our accelerated rollout”.

“We are committed to ensuring this technology reaches all homes and business in Brisbane faster than under Labor,” Gambaro wrote.

Misleading the public
Some aspects of Gambaro’s letter appear to be accurate. For example, the NBN Strategic Review published in November 2013, shortly after the Coalition took power in Canberra, stated that some 227,483 premises had been passed by the NBN as at 30 September that year.

The NBN is currently undergoing an accelerated deployment schedule, owing to the Coalition’s Fibre to the Node model, which is much faster to deploy than Labor’s previous FTTP approach. The 15,000 premises per week figure apears to be currently accurate, and it is also true that the Brisbane electorate has already had NBN construction in its area.

However, in other areas, the Liberal MP’s statement appears to be inaccurate.

For example, it is inaccurate to say that $40 billion has been wasted by the NBN company under Labor. The NBN company itself has not yet spent the Government’s planned $29.5 billion investment in the project, and the money that has been used so far has been used to deploy critical broadband infrastructure to the around two million premises the NBN company has passed with its network.

In addition, the NBN company has published calculations on a number of occasions stating that it would be likely to make a return on the Government’s investment under any network model — FTTP, FTTN or the MTM mix, meaning that the Government would actually make a profit on the infrastructure.

The private sector has so far proven unwilling to deploy upgraded broadband infrastructure on anywhere near the scale of the NBN.

In another example, the only reason that the Coalition has been able to deploy the NBN so rapidly during its term in power over the past two and a half years is because much of the grounding preparation work for the NBN rollout was done during Labor’s period in office. The NBN company has always stated that it would gradually accelerate its rollout over the years.

In contrast, the Coalition has made relatively little progress during its term with its own favoured technologies (Fibre to the Node and HFC cable), with the vast majority of its NBN success having been achieved under Labor’s model.

In addition, it is not clear that the NBN rollout in Gambaro’s electorate will be finished by 2018, with the NBN company’s rollout map currently showing no construction in most of the area. Delimiter invites comment and analysis from readers to determine to what degree the statement is accurate.

Delimiter invited Gambaro to comment on the information contained in her pamphlet.

In response, a spokesperson for Gambaro said the information used in the mailout was compiled from data provided by both the office of Communications Minister Mitch Fifield and the NBN company.

The approach of distributing misleading information about the NBN, and NBN policies, has become common during Federal elections, with both the Coalition and Labor distributing a range of misleading material during the 2013 Federal Election especially.

opinion/analysis
This kind of misinformation being distributed during an election campaign is not surprising … typically what happens is that key pieces of information about the NBN are boiled down into election slogans and then distributed from head office to MPs all over Australia. Some misinterpret (sometimes willingly so) the data even further.

However, it is disappointing to see this, and Delimiter will be pointing out errors where we can, as the campaign rolls on.