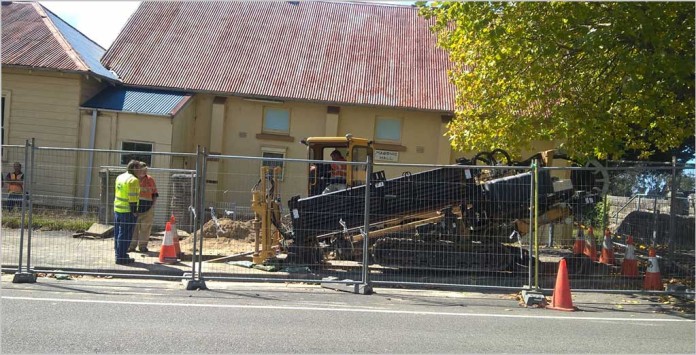 news A raft of further details have emerged about the second National Broadband Network-related fatality to take place in the Blue Mountains town of Katoomba earlier this month, including photos of the location where the tragic accident took place, as well as some of the circumstances involved.

Early this moth, the NBN company issued a very short statement noting that it had been advised of a “reported fatality” of a contractor working for one of the company’s delivery partners on the NBN network in Katoomba.

Police closed Katoomba’s Station Street at the time for a period, and the Blue Mountains Gazette reported that a man believed to have suffered “head injuries” in what the newspaper called “an industrial accident”. The NBN company expressed its sadness regarding the accident but has withheld any further details from publication.

The Irish Times has since named the worker as being Paul Walsh, a 37-year-old Irishman who was had been living in Australia for about eight years. Walsh’s former sporting club in Ireland had issued a statement stating its sadness about the loss and passing on best wishes to Walsh’s family. It also held a minute’s silence before a match. Walsh is reportedly originally from Rhue in Tubbercurry.

In a statement released yesterday, the Communications Workers Union revealed the worker was killed as the result of a “drilling” accident.

“The worker was employed by Rockfield Contracting which specialises in boring and drilling services,” the union wrote. “Rockfield was in turn a sub-contractor of Visionstream which is one of nbn’s “delivery partners”.”

In photos sent in by a Delimiter reader, several industrial machines can be seen in the area where the accident occurred on that day.

The reader said that there were often a number of workers in Station Street, with the construction work in that location having been under way for about three weeks. The readser had seen what they described as a ditch digging machine, a cable pulling machine, and associated transport vehicles.

The CWU wrote in its statement that the death highlighted the dangers which the union believed were inherent in the workforce model being used on the NBN contract.

“As the CWU has repeatedly pointed out, this pyramid contracting structure leads to those at the bottom of the heap being exposed to the most risk,” the union wrote. “Those risks are both financial and, unfortunately, physical. Small operators at the base of the pyramid face tight margins, while training and supervision – the key to avoiding such accidents – represent costs.”

“So there is a constant pressure to cut corners when it comes to safe procedures and work quality.”

CWU President Shane Murphy called on nbn to ensure that subcontracting companies working on the project delivered a safe system of work for their employees.

He also pointed to the fact that directional drilling machines such as the one involved in this incident can be operated without any certification.

“No ticket is required to operate the drilling machine Walsh was working with when he died,” he said. “The CWU urges the Federal Government, nbn and Comcare to ensure there is mandatory training and certification for all workers using drilling machines.”

However, the reader noted that from their observations, the construction crew on Station St appeared to have what he described as a high regard for work safety, with the operator of the ditch digging machine appearing to be “very skilled”. The reader had observed a fairly deep rectangular hole being dug in the area which had been fenced off overnight.

“There appeared to be some technical issues with the cabling operation as work was proceeding very slowly, the cable pulling often coming to abrupt halts over several days. This cabling operation was less than 100m,” they said.

The fatality is believed to be the second such incident to have occurred during the NBN rollout.

In May 2013, a similar incident occurred in the early NBN rollout zone of Kiama in the New South Wales South Coast.

At the time, a 57-year-old man was trapped between two trucks in the town and lost his life. A man was later charged with various offences, including negligent driving and driving with an illicit drug present in their blood.

The NBN is not the only project to have recently suffered fatalities with respect to the process of deploying telecommunications infrastructure in Australia.

For example, in February this year, it was reported that a Telstra worker had tragically died after falling off what is believed to be a mobile phone tower in the Adelaide River area.