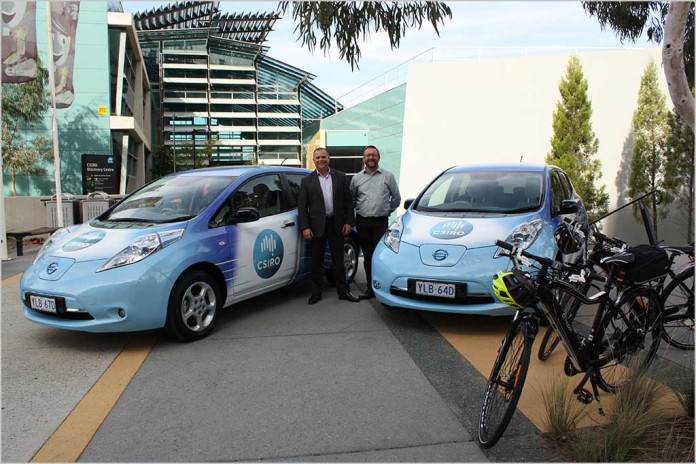 news The Commonwealth Scientific and Industrial Research Organisation (CSIRO) has announced it is taking steps to reduce its carbon footprint with the rollout of 100% electric cars to its national fleet.

According to the organisation, the first two of a planned 10 fully electric cars, as well as two additional electric bikes, have been delivered to staff at its Discovery Centre at Black Mountain, Canberra.

“We are rolling out these new electric cars across seven of our sites to enable petrol-free motoring within CSIRO’s pool of fleet vehicles,” said Mark Wallis, CSIRO General Manager, Building and Infrastructure Services.

With the addition of solar PV panels at CSIRO sites, the organisation indicated it aims to generate sufficient renewable energy to charge and run the cars, making them emission free in day-to-day use.

“This is certainly a greener alternative when you consider that the manufacturers say: ‘parts of the interior and bodywork are made from recycled water bottles, plastic bags, old car parts and home appliances’,” Wallis said.

The remaining electric cars on order will shortly be delivered to other CSIRO locations, including Melbourne, Brisbane, Hobart, Perth, Townsville and Newcastle.

“The cars and electric bikes are the latest in a raft of initiatives to lower emissions, reduce waste and improve the sustainability of operations across CSIRO,” Wallis said.

“As our scientists continue to lead the way in many aspects of alternative energy, emissions and waste reduction, and water and energy efficiency technology – we also want to be an organisation that puts those same things into action across our sites and operations,” he said. “The money saved or earned can be reinvested into national science priorities.”

To date, CSIRO has introduced 36 electric/petrol hybrid cars to its fleet in 2015, replacing petrol-only vehicles.

According to its own figures, CSIRO has also brought about a 2,300-tonne CO2 equivalent (tC02e) emissions reduction, and $176,000 estimated cost saving, from a nationwide campaign to close laboratory fume hoods when not in use.

Further, a 162 tC02e emissions reduction (and $32,000 annual saving) was brought about by the installation of 120kW photovoltaic rooftop solar panels generating 214 MegaWatt hours of electricity per annum at the joint venture Pawsey (supercomputer) Centre in Perth, Western Australia.

A similar scheme at the Australian Resources Research Centre in Perth saved 134 tC02e emissions reduction and $26,000 each year, while lighting upgrades in stairways, exits, balconies and building re-commissioning projects in selected laboratories made further reductions.

“Together with electric cars and these sustainability measures, where it makes good sense, we are reducing our environmental footprint by consolidating our operations at key sites, as we have just done at Black Mountain, Canberra,” said Wallis.