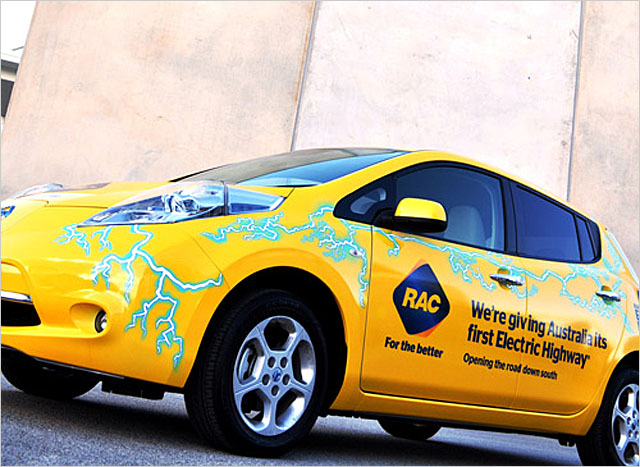 news The Royal Automobile Club of Western Australia this week revealed it had build a network of charging stations around the state that can be used by anyone with an electric vehicle, as infrastructure of this kind continues to be deployed around the nation.

In a statement first noticed by RenewEconomy, the organisation said the so-called RAC Electric Highway would be the first of its kind in Australia. It will consist of a network of publicly accessible electric vehicle fast-charging DC stations located between Perth and the South West.

There are currently four RAC Electric Highway charging stations which have been constructed — in Mandurah, Bunbury, Busselton and the Margaret River, and a further eight under construction in Augusta, Nannup, Bridgetown, Perth, Donnybrook, Dunsborough, Fremantle and Harvey.

The RAC said that while charging time will vary, most car batteries will charge from flat to 80 percent in twenty minutes on a DC fast charge. AC charging times range from four to eight hours. Customers will need to register for an access card to activate the charges, and there will be a charge for using the infrastructure from 1 January 2016. Access to the chargers will be on a first-come, first-served basis.

The RAC itself is currently testing electric vehicles and owns two Nissan Leaf models, as well as having EV charging capability at its head office in West Perth and its driver training facility.

The news comes as electric car infrastructure is increasingly being rolled out around Australia. Tesla, for example — currently the global leader in electric vehicles — announced in June that it had already established charging units at a number of locations in hotels in Sydney, Canberra, Port Macquarie and Melbourne. The company is also partnering with Secure Parking to install charging stations in carparks around Australia.

opinion/analysis
We’re going to keep on seeing more and more of this kind of infrastructure deployed around Australia as EVs (electric vehicles) take off more and more. I’d expect a constant series of announcements like this.