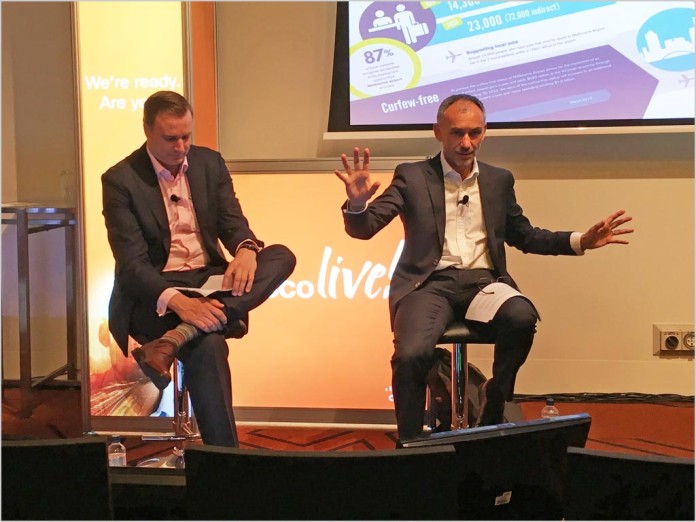 In a wide-ranging question and answer session at the Cisco Live conference in Melbourne this morning, Bunker emphasised the continuing importance of technologists being able to communicate effectively with those from other disciplines.

Like many organisations, Bunker said a key focus for Melbourne Airport’s IT team was to keep operational matters under control; an issue especially important for a business with such safety imperatives and time sensitivity. However, he said that like any business, Melbourne Airport was still owned by investors, and it was critical to be able to also use technology to grow the business in an effective way.

In Melbourne Airport’s case, this had manifested recently in the development of the organisation’s new Terminal 4 facility.

Bunker said that the new terminal was designed to meet the needs of low-cost airways such as Jetstar and Tiger. The development of the terminal, thus, featured the use of technology in such a way as to reflect this low cost and ease of use philosophy shared by the low-cost carriers.

When passengers enter the terminals, they are greeted by automated check-in and bag drop systems, and then await their flights in a single waiting area — there are no gate-specific waiting areas. Passengers are blanketed with free Wi-Fi and free to get on with their lives online while they check the status of their flight on giant screens nearby.

Behind the scenes, Bunker said high-speed network connectivity was key to flow data — ‘the blood of the airport’ — around the facility. “It sits behind the scenes, it’s very unseen but absolutely critical to operate in the right way,” he said.

Bunker said that even with this behind the scenes IT infrastructure, it was important to communicate effectively with Melbourne Airport’s business management.

He pointed out that Melbourne Airport was continually growing and processing more flights and passengers. With this in mind, he said, it was important that the group’s IT infrastructure stayed ahead of the business’s needs.

Bunker noted that Melbourne Airport’s always on nature and high availability situation meant that it could not afford to get to a situation where its IT infrastructure was not coping with the volume of traffic — it always needed to stay ahead of the curve in terms of its capability.

This needed to be explained in terms the business could understand he said, pointing out that sometimes people could assume that things would continue to work well behind the scenes because they always had.

“If the day has arrived when we have 50 million passengers, and we only have the capacity to support 30 million, it’s too late,” he told the Cisco Live audience. The “scary part” was in forecasting that growth, Bunker said — given that the development of the IT industry and technology in general could only be forecast so far ahead.

One example Bunker gave related to self-driving cars. The CIO pointed out that airports made substantial revenues from the major car parks they operated. The development of self-driving cars — which could pick up passengers, drop them at the airport, and then leave, could change this paradigm.

For a CIO in his position, Bunker said, this kind of example showed that such CIOs needed to be careful about when they flagged these kinds of technological trends to management.

“When do I start to have that conversation with the management of car parks … without them going: ‘Mate, did you wake up sick this morning?’,” he said.

One technology which Melbourne Airport relies on strongly to get its work done is VCE’s vBlock technology.

Bunker said Melbourne Airport had decided that it was going to invest in “quality tier one applications and infrastructure to run the place”. Melbourne Airport has about 250 production virtual servers, and uses about 2.5 petabytes of data storage capacity.

The CIO said in his view it was important for organisations to tightly define their requirements before selecting vendors, as well as ensuring they partnered with the right organisation.

“‘Partner’ really does mean when the crap hits the fan, we’ll be there to help you out. It’s not buy, drop, forget, it’s partnering to create the outcome you expected in the very beginning. And then, how do you draw value for money from these things. Value from money is when you extend it further,” he said.

Aside from all the serious aspects of his role, Bunker also said he enjoyed the aspect of working at an airport specifically, with its giant infrastructure and planes.

“One of the things you do get at the airport is to play with big stuff,” he said.