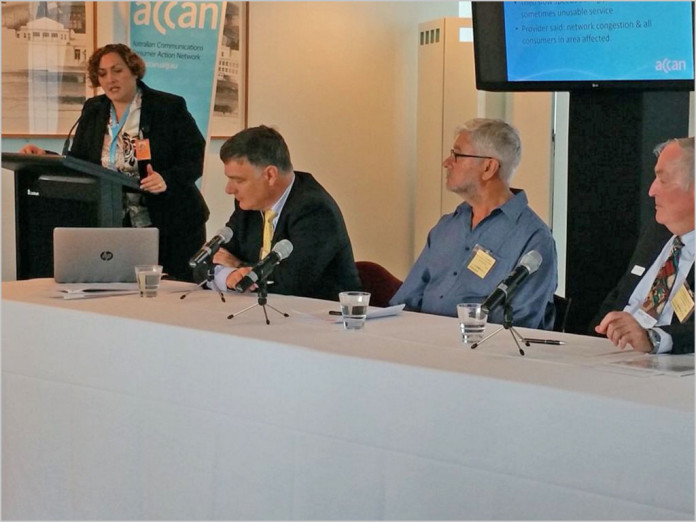 news The Australian Communications Consumer Action Network (ACCAN) held its Meet the People Forum at Parliament House in Canberra yesterday to lay out its telecoms priorities for 2016.

The forum also brought consumers before Parliamentarians to discuss their experiences with telecoms issues such as fixed line connections, fault repair and reliability, disappointing broadband performance, and the way cost can form a barrier to being connected.

“Access to reliable communication services is vital for Australian consumers and is essential for social and economic participation,” said ACCAN CEO Teresa Corbin before the forum. “But the current CSG only protects the Standard Telephone Service (STS). This is out of step with changes in consumer usage patterns, which are now overwhelmingly moving towards mobile and broadband communications.”

One issue discussed at the event was the lack of transparency around broadband performance.

A recent ACCAN survey found that consumers were disappointed with their broadband services.

The group said gaps in consumer knowledge mean consumers have little visibility of what affects the performance of broadband. Without this information, consumers cannot choose services that suit their needs based on performance and may struggle to identify and correct poor performance when it occurs.

“Currently consumers can only see part of the picture when shopping for broadband plans,” said Corbin. “We hear from many consumers who are struggling with broadband services that offer poor performance.”

In the survey, consumers cited price, monthly data allowance and performance as the three most important factors for broadband services.

“The missing piece is information on performance,” said Corbin. “ACCAN is calling on the Federal Government to support an independent broadband monitoring program to fill the gap in consumer information.”

According to ACCAN, affordability of telecoms services is becoming increasingly important as government and other essential services shift online, leaving consumers on lower incomes struggling to pay for upfront connection and ongoing costs.

Figures released last week show that for households with children under the age of 15 who did not access the Internet, the main reason given was cost (43%). This was also given as the third most significant reason overall for not accessing the Internet at home (after ‘no need’ and ‘lack of confidence or knowledge’), ACCAN said.

To address these issues ACCAN is proposing that the Centrelink telephone allowance be reviewed, describing it as “no longer fit for purpose”.

“Voice and data services are essential to the social, economic, and community participation of low-income Australians,” added Corbin. “We would welcome an allowance with broadened eligibility to include all people on the lowest income support payments and increased rates to ensure that affordability barriers don’t lead to ongoing lack of connection.”